Syria: Wearing Pajamas and The Level of Education at Universities

Carmen Kareem
Syrian Journalist
March 21, 2022
Menu
A lot is wrong with Syrian higher education, yet allowing pajamas to be worn, or not, will not improve things. Syrian education is tainted by a lack of staff, corruption and even sexual harassment. The international sanctions do not help either.

A student is allowed to wear pajamas inside the university dormitory, but he cannot do so outside. The reason for this is not known, but has something to do with the wish to improve education in Syria. However, the country’s universities generally occupy the bottom place in global rankings. And, think a little, pajamas and student clothing have nothing to do with the quality of education.

On February 20, the Baath Party took a decision, which was signed by the Secretary of the Tishreen University branch in Latakia, stipulating that pajamas are allowed to be worn in university dormitories. Students also have permission to enter the university residences in pajamas, but only from 15h in the afternoon till 20h in the evening and only from certain doors. Until 23h in the evening another door should be used.

There is no clear explanation for this new policy, and why does the Baath Party focus on pajamas and the way students dress? Amidst the chaos in Syria, the regime is taking decisions that are ridiculous, to say the least. It is as if a clown has put them down, not an official or minister.

And that is not all. The pajama’s decision was followed by the following: it is now forbidden to hit a student under any circumstances! This means that, before, beatings were available to security officers inside the dormitory and university campus, which is terrifying thought …

Interference with students’ dress code is nothing new. Damascus University banned wearing certain clothes, such as the niqab, shorts, jalabiya and certain sportswear under the pretext that it is not appropriate for university students. The university instructed the guards to prevent students who did not comply from entering.

These decisions do not improve the quality of education, as hundreds of university teachers have emigrated and left courses without the expertise needed to be taught. Not to mention the rampant corruption and the leaking or buying of exam questions.

Superficial attempts to improve education and prevent cheating continue. For example, it is forbidden for students to take mobile phones into exams to prevent cheating, which is a strange decision, as alternative solutions can easily be found.

While it is unreasonable to deprive a student of carrying his phone in a country where all security has collapsed, where a person may be exposed to danger at any moment and urgently needs to communicate. And there is no real benefit to the measure, as questions are leaked in many courses, either by the committee responsible for printing them or by the teacher, who receives good money for it.

Reem (a pseudonym) graduated in French literature last year. She succeeded in many courses by buying the questions just hours before the exam. This would also reduce the price. Reem would then share the questions with other students. So, in the end the questions got to (some) students for a very low price!

As for Rama (a pseudonym), who is married and resides in the Emirates, her graduation about three years ago depended on success in one final subject. I went with Rama to meet the teacher. Rama was charged 75,000 Syrian pounds for the questions. While I stood there the teacher hid behind some bushes. He refused to give her all the questions, only some of them. But he promised she would succeed. Rama did indeed pass the exam and graduated.

Young Syrian men and women are prevented from traveling after their graduation, as they are forced to join the military. As a result, hundreds enroll in higher education with the sole aim of postponing their military service until they find an opportunity to travel. Young Syrians either submit and perform the service or they remain at home without daring to go out, for fear of arrest and being forced to join.

Another decision recently issued prevents students from obtaining a university degree unless they get a paper from the Ministry of Foreign Affairs showing their movement in and out of the country.

Recent voice recordings of Dr. Muhammad Murhaf Al Qasimi, Vice-Dean of the College of Petrochemical Engineering at Al-Furat University in Deir ez-Zor, expose him, as he addressed a female student in sexual terms in exchange for offering her the exam questions. As a result of Caesar’s Law, Syrian students are unable to access global libraries and academic search engines, as they are unable to pay electronically due to the international sanctions.

Applications that helped students in their study, such as Coursera and Duolingo are no longer accessible due to the sanctions. In addition, they are no longer able to provide language exams, forcing students to make an expensive trip to Lebanon, Jordan or Egypt just to take an exam.

No Objections to Corruption

Meanwhile, students cannot even object. Protesting may lead to being held accountable, unfair dismissal and penalties.

The Syrian regime forces arrested a law student in Damascus for running a widely read page talking about the rampant corruption in Syrian universities and the overall bad academic climate in the country.

Merely commenting on a professor’s behavior or referring to corruption, in whatever form, may lead to the student being held accountable.

In 2019, two students of economics, Sonia Al-Batah Al-Husseini and Rita Hassan Hamoudeh, were referred to the disciplinary committee, after Sonia revealed on social media that one teacher had leaked the exam questions. Sonya was subsequently expelled from university for two months. The decision worked as a threat to anyone who dared pressing “like.” 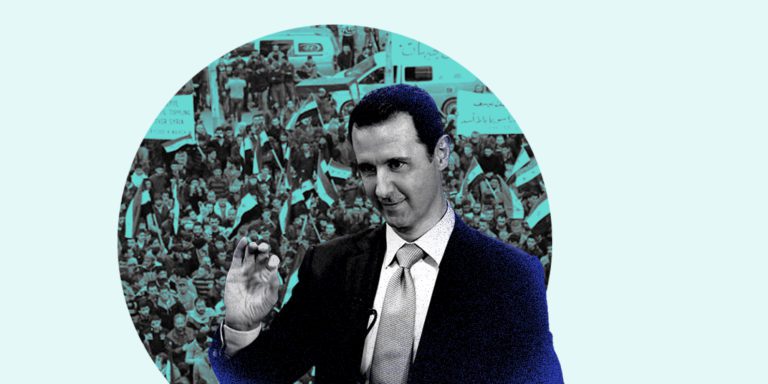