Vicken Cheterian
Armenian Journalist and Writer
February 25, 2022
Menu
On February 24, 2022, the Russian military invaded Ukraine. International Relations will not be the same again. As the Russian military targets the entire territory of Ukraine, its political objective remains ill-defined.

What is the political aim of the Russian invasion of Ukraine? The long military preparations, and the magnitude of the operations make it clear that Russian objectives are not limited to the two breakaway republics of Donetsk and Luhansk.

To understand what Russia plans to achieve with this invasion, one should go back to Putin’s speech of February 21, in which he denied the right of Ukraine to state sovereignty. The aim of the invasion is therefore to trigger regime change by military invasion, and bring Ukraine under Russian domination.

International relations will never be the same again. Russian military operations are not comparable to those of 2014 where Russia annexed Crimea and created a state of permanent war in Donbas. Nor can we compare the current invasion with the Russo-Georgian war of 2008, when the Russian military could have advanced to Tbilisi and bring down Mikhail Saakashvili, but refrained from doing so.

Today, Russian invasion of Ukraine aims at total domination. It is comparable to the US invasion of Iraq in 2003, with its known catastrophic results.

To analyze the current crisis, it is necessary to distinguish two levels of conflicts: the Russo-American relations, and the Russian-Ukrainian relations. The current conflict in Ukraine is the outcome of two “original sins”. The first is the US decision under the democratic Bill Clinton in 1993 not only to preserve NATO – a military alliance that was formed to oppose the Soviet Union – but also to expand it eastwards.

Other alternatives, such as dismantling NATO, finding common security architecture in Europe that included Russia, were ignored. At some point, this endless military expansion eastwards had to clash with Russian resistance.

Why now? Because Russia feels self-assured after its massive military reforms since 2008, its “successful” military campaigns in Chechnya, Georgia, Syria, Libya and elsewhere, but also because Russia with its 1 million strong army has preponderant military might in the European theatre.

On one level, this conflict is one great power talking to another great power: when Putin addressed his December 17, 2021 demands to roll-back NATO to the 1997 positions, this demand was not sent neither to Kyiv, nor to Brussels, but to Washington. Putin was talking to Biden in the same language of hegemonic power: to push back the geopolitical boundaries of Eastern Europe, simply because Russia today has the means to do so, much like the American behaviour in the 1990’s.

But there is another level of analysis, that of the Russian-Ukrainian relations, and here the second “original sin” was committed by Russia in 2014 in the context of the “Euromaidan” Revolution.

Ukraine is a vast but fragile state. Both its internal composition – a large Russian-speaking population in its east and south, and pro-Western population in Galicia – but also its geopolitical situation between Russia on the one side and NATO and EU on the other, forced Ukraine into a balancing act.

We already saw this swinging act in 2004, when after the “Orange Revolution” the pro-Russian candidate Victor Yanukovich returned to power. Even after Euromaidan the possibility of recreating the equilibrium between Russia and the West was real. This possibility was destroyed by the Russian annexation of Crimea and the war in Donbas.

After 2014, no Ukrainian leader could compromise with Russia, and even less expressed pro-Russian positions. Russian actions pushed Ukraine towards the West, and its internal politics towards nationalism defined as anti-Russian.

The invasion we are witnessing today will consolidate Ukrainian national-identity in nationalistic terms, marking the definitive break between Ukrainian and Russian identities. This is a painful process that started in 2014, and will tear apart the social fabric of not only Ukraine but also Russia.

It remains to be seen whether Putin will succeed in obtaining what he wants from Ukraine using this military invasion. Yet, what concerns his relations with the US, NATO, and Europe will be a disaster. The Ukrainian crisis in the last few months revealed a very divided “West”: on the one hand a US preoccupied elsewhere – in the Pacific region and with internal political problems – and not ready to confront Russia in Ukraine.

US President Biden, who more than once predicted the coming Russian invasion, had nevertheless made it clear that the US was not sending its soldiers to defend Ukraine. In Europe, there are countries bordering Russia, such as Poland and the Baltics, fearing Russian re-emergence had traditionally had hard-line positions against Moscow. But major EU states such as Germany, France, and Italy wanted normal relations, and to resolve Russian security concerns through diplomacy. This third way is now defeated.

The Russian military invasion of February 24 is the end of the efforts of Macron and Scholz. Russia, after consolidating Ukrainian nationalism, will consolidate NATO on its borders. From a historic low of 70’000 troops, the US might re-deploy new military forces in Europe. EU countries fearing Russia will increase their military spending.

While the current conflict might push oil and gas prices upward, EU countries will seek alternatives to Russian energy. The West will also impose severe economic and financial sanctions on Russia. If Moscow, with its over 600 billion reserves has the means to resist financial pressure, let us have no illusions about the catastrophic impact of the war and the sanctions on the world economy severely crippled after two years of pandemic.

But the most to suffer will be Ukraine and the Ukrainian people. Ukraine is one of the most tragic countries in Europe, which through its history suffered immensely. It was born as an independent state in the horrors of the First World War, followed by the Russian civil war that claimed millions of victims. During Stalin’s forced collectivization of land in 1932-33, Ukraine suffered mass famine, known as Holodomor, which caused the starvation “from 7 to 10 million” people.

During the Second World War, Nazi occupation forces used millions of Ukrainians as slave labour, exterminated Ukrainian Jews and other minorities, while some of the fiercest battles between German occupation forces and Soviet troops took place in Ukraine. Ukrainian losses in WWII are between 5 and 7 million. The collapse of the Soviet Union was very painful for Ukraine; one indicator summarises its immense suffering: Ukrainian population declined from 52 million at the collapse of USSR in 1991, to 43 million currently.

Today, Ukraine is once again a victim.

Russia might have legitimate security concerns towards NATO. But is there a law on earth that denies Ukraine and Ukrainians from their legitimate right to security, dignity, and independence? 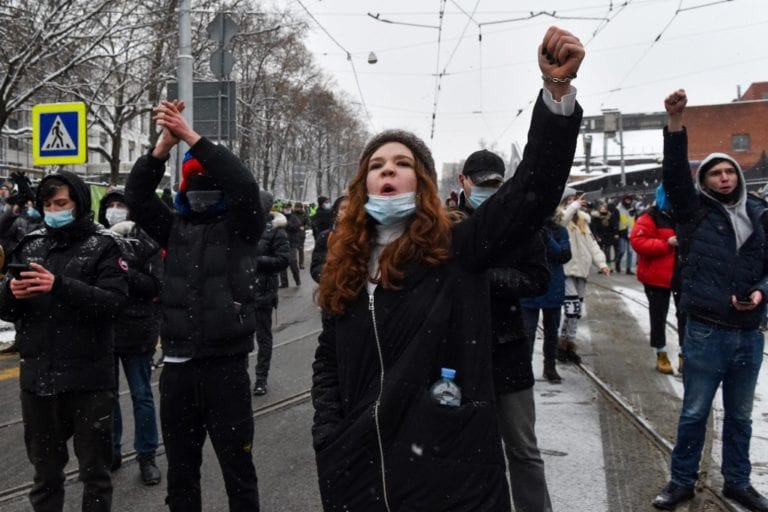