Vicken Cheterian
Armenian Journalist and Writer
February 14, 2022
Menu
In a matter of days, Azerbaijani politicians succeeded in censoring the history of their own republic, and officially announced future acts of anti-Armenian cultural genocide.

In a matter of days, Azerbaijani politicians succeeded in censoring the history of their own republic, and officially announced future acts of anti-Armenian cultural genocide.

Earlier in January, a journalist working at Azerbaijani official television company “AzTV ” announced to broadcast a documentary entitled “Secrets of a Hundred Years’ ‘ on Mahammad Amin Rasulzade, the founder of the First Azerbaijani Republic (1918-1920). It was going to be broadcasted on January 31, on the 138th birthday of Rasulzade. Yet, on January 30, AzTV denied that such a documentary was planned. In the best Stalinist tradition the documentary about Rasulzade officially never existed.

The ruling circles in Baku do not know how to behave towards the founder of the Republic of Azerbaijan, who lived a century ago. Their only answer to the memory of the founder of their republic is censorship. It is not clear what bothers the current rulers in Baku in Rasulzade, but one could be the “democratic” adjective associated with the First Republic. Another could be competitive legitimacy between the ruling Aliyev dynasty, and the legacy of Rasulzade’s Musavat Party, which inspired generations of dissident Azerbaijani nationalist intelligentsia.

Censoring the memory of Rasulzade reflects deeper uncertainties: Azerbaijani ruling elite has difficulties defining not only the past of their republic, but the current identity of Azerbaijan, the state and its people. This uncertainty is the result of decades-long ideological imposition of identity based on political expedience, where top-down “one-size-fits-all” national identity is imposed on a complex and pluralist society. In this process, history is distorted to make it fit with the ever changing policies of hegemonic rulers.

A few days later the same mechanism continued its march in destroying history for the benefit of ideology. On February 3 Azerbaijan’s minister of culture Anar Karimov announced the formation of a governmental “working group of specialists in Albanian history and architecture” to “remove the fictitious traces written by Armenians on Albanian religious temples”. A minister who does not know what to do with the memory of the founder of his state dating from the early 20th century, how could he know anything about Caucasian Albanians, a little known culture that went extinct some 1300 years back?

Yet, Azerbaijani minister of culture was just announcing that his government was preparing cultural genocide – and I am measuring the severity of the term genocide. His government has already destroyed Armenian cultural heritage – in fact, every single Armenian stone – in Nakhichevan, including the Julfa cemetery with its inestimable value for global history and culture. Back then, Azerbaijani authorities claimed that the Julfa cemetery and the numerous monasteries in Nakhichevan were of “Caucasian Albanian” heritage, and not Armenian. Still, they did not hesitate to send the army and destroy the centuries-old Khachkars (cross-stones).

Those acts of cultural destruction put Azerbaijan in the same league as the Taliban with their destruction of the magnificent Bamyan Buddha statues back in 2001, or the Islamic State destroying pre-Islamic, Christian and Yazidi sites in Syria and Iraq. Armed bands destroy artefacts as a way to erase historic memory and impose their ideological version of the past – and a totalitarian future.

Now, Anar Karimov again announces that he is going to destroy centuries old Armenian churches, monasteries, and other historical artefacts: destruction of history is the only manner for Azerbaijani state to lay claim to Karabakh, by pretending that those lands and its culture belongs to “Caucasian Albanians” and not to Armenians.

Those two events – censoring the history of the First Azerbaijani Republic, and announcing the forthcoming destruction of Armenian cultural heritage – took place only days apart. They are intrinsically linked. In both cases the political leadership of Azerbaijan intervenes to dictate what is history, to censor, self-censor, and destroy past history as the only way to earn political legitimacy.

Many dissident intellectuals in Azerbaijan have rushed to defend the memory of Rasulzade in the face of censorship. They did this in the name of Azerbaijani democracy, against dictatorship, and against dynastic rule. This, again, is problematic: turning Rasulzade, the founder of the First Azerbaijani Republic into a “democrat” and anti-authoritarian figure is as ahistorical as the destruction of Armenian cultural heritage in the name of “Caucasian Albania”.

The real Rasulzade is much more complex and controversial than those ideological projections: just like the rest of the Caucasus intelligentsia of early 20th century, he was a socialist as well as a nationalist, pro-Ottoman and pro-Qajar reformist, one time Bolshevik and in others flirting with the Mensheviks, a leader of the socialist Himmet becoming the leader of Musavat, active in Iranian Constitutional Revolution before becoming pro-Ottoman pan-Turkic, collaborating with the Young Turks. Rasulzade’s biography embodies well this passage of a whole generation from political pluralism in the pre-1918 period, into an ill-defined Azerbaijani nationalism associated closely with the Young Turks and the Committee of Union and Progress (CUP), and their pan-Turkic ideology.

Azerbaijan, like most unreformed post-Soviet republics, suffers from the long shadow of Stalinism in state intervention in defining its history, and therefore its collective identity. Yet, unlike most other post-Soviet republics, Azerbaijan carries another heavy burden: the intrinsic association of modern Azerbaijani nationalism with the Young Turks, with the Committee of Union and Progress, with the “Army of Islam” and its leader Nuri Pasha and with the genocidal Enver Pasha.

The censorship of Rasulzade and the promised destruction of Armenian culture testify once again how interrelated Karabakh conflict is with the history of the Ottoman Empire and modern Turkey, and especially the extermination of Ottoman Armenians and the destruction of their cultural heritage. The events also remind us that top-down nationalism and the construction of national identity is in essential contradiction with democracy, pluralism, and freedom of expression.

The conflict between Azerbaijan and Armenia will not find a solution as long as autocratic rulers take history hostage for their ideology-building projects. Azerbaijani democracy will not advance as long as Azerbaijani public associates itself with totalitarian ideologies, be it Stalinism or Young Turkish nationalism. But historic material is rich, complex, and diverse, and by looking at it one can find ample examples and multiple paths, free-from imposed ideological tell-tales. 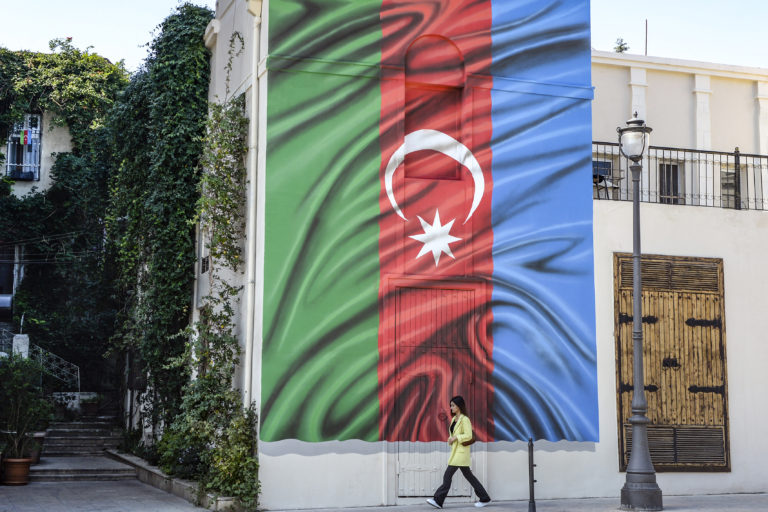