Diana Moukalled
Lebanese Writer and Journalist
20.01.2022
Menu
Lilian Chaito is a double victim. She is a victim of the Beirut port explosion and she is the victim of an archaic patriarchal system, which prevents her from seeing her son and traveling for treatment in Turkey…

Lillian Chaito regained consciousness after many months in a coma. She nodded, and somewhat reacted to what was happening around her, although she is still unable to speak.

Arguably the hardest thing, those around her say, is that the 27-year-old is living in a state of depression. When children appear on the TV screen in front of her, she silently cries for hours on end.

As she is lying on her hospital bed dealing with the repercussions of the Beirut port explosion, Lillian is not aware she is fighting another fierce battle. Ever since the first days of her escape from death, the custody fight over her baby Ali, who was only a few months old at the time, erupted.

For over 16 months, Lilian has been treated for a severe head injury she suffered as a consequence of the blast on August 4, 2020. Her story touched many people, who sympathized with her even more once they learnt about the reluctance of Lillian’s husband and his family to allow baby Ali to visit her in hospital, even though her family and some of her therapists believe that is essential for a successful treatment.

The latest chapter in this ongoing battle is the recent failure of the Shiite Ja`fari Court to respond to Lillian’s family’s request to hand over her passport and grant her permission to travel for medical treatment.

Lillian’s husband had originally requested to become his wife’s legal guardian as she was in a coma, but after backlash from the media the court decided against it, and instead placed itself as her legal guardian.

The decision was a formality and an attempt to improve the image of Lebanon’s Ja`fari courts, which have a reputation for massive injustice and corruption against women of the Shiite community.

Does the Ja`fari Court wish to contribute to this young woman’s suffering, caused by the corruption of Lebanon’s ruling class and the port explosion, which seriously injured her and countless others?

The injustices that fell on Lillian’s shoulders since the port explosion have been incredibly heavy to bear.

Does the Ja`fari Court seek to liquidate the young woman, after her body and mind were exhausted for over 16 months?

Lillian was always a cheerful young woman, a law graduate, who used to live with her husband, Hassan Hodroj, in Africa, where he works. She only returned to Beirut in the summer of 2020 to give birth.

Her baby was one month and a half old when the shipment of ammonium nitrate stored in the port exploded, killing some 200 and injuring 6,000 people.

Lillian was shopping in the city center to buy a gift to surprise her husband on his birthday. The explosion caused a storefront in the Beirut Souks to fall on her, severely injuring her head.

People thought she was dead, and, at first, the doctors did not expect her to survive. Worse, her family claims the doctors tried to prepare them for the idea she would not survive. But Lillian lived and eventually responded to the treatment.

The irony is that her husband only came to visit her three times in the hospital. The first time was 25 days after the explosion. The husband’s parents never visited her. It seems Lillian’s mother-in-law is the main obstacle for Lillian to meet her son.

Her husband’s family is very wealthy. It is noteworthy that the family’s lawyer is Ali Rahal, a leading figure in the Amal Movement (Amal) and a lawyer for Randa Berri, wife of Amal leader and Parliament Speaker Nabih Berri.

This suggests a power and influence that neither Lilian’s family nor Lillian herself has the power to confront. Did this power and influence play a role in putting pressure on the Ja`fari court and Lillian’s case in general? Lillian, who is trying to survive the worst crime in Lebanon’s history, is waging a daily battle for justice. Her husband perceives her as a woman who no longer meets the conditions of marriage, and so he has the right to abandon her and continue his life …

Lillian’s tragedy is one of hundreds linked to the Beirut port explosion. Yet, it intersects with another tragedy, which is Lebanon’s patriarchal system that does not hesitate to victimize a woman by abandoning her, depriving her of her son, and even treatment.

In that sense, Lilian is twice a victim. She is a victim of the crime that is the Beirut port explosion and she is a victim of a gross injustice, which is linked to the patriarchal mind and unfair system of laws in Lebanon.

Traditional society and courts prevent Lillian from seeing her son, which doctors believe is the single most important step on her journey to recovery.

The Ja`fari court, which has a long history of unfair rulings against many women, is today responsible for obstructing Lillian’s treatment.

These religious courts, which have always been politically associated with powerful people in Lebanon, Hezbollah and Amal in specific, repeat their crimes daily by crushing people. Lilian will not be the last victim, unless this abhorrent immorality is put to an end in the name of religion. 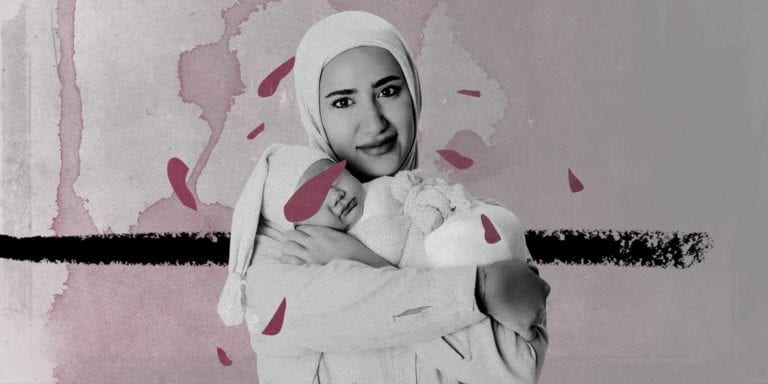