Syria: The Sanitary Pad as a Luxury Item Many Cannot Afford

Maksim Othman
Syrian Journalist
December 16, 2021
Menu
She was a stranger with a strange appearance and a strange request. “I’m not a beggar,” she told my mother. “I just want some old clothes or rags that you no longer need. I need them as a pad for my paralyzed daughter.”

A knock on the door at noon is not a strange thing. Guests can visit whenever they want, especially women who are retired or confined to their homes. The building does not have doors that close anyway. So anyone can make a sudden visit.

It is an unheard of luxury in Syria to have a bit of privacy. Safety measures are virtually impossible to implement. There is only electricity for two or three hours a day. So, electricity is no longer the backbone of life, as they say. And, in a city where the buildings do not differ from the open houses in a village, anything can happen.

The one who knocked on our door was not one of my mother’s friends or neighbors. She was a stranger with a strange appearance and a strange request.“I’m not a beggar,” she told my mother. “I just want some old clothes or rags that you no longer need. I need them as a pad for my paralyzed daughter.”

I observed the scene attentively. I saw my mother’s face as she stood at the door. My mother turned and looked confused. The woman’s luck was that we had sanitary pads. My brother needs them. Some 12 pads every three days.

Like everyone else in the country, I was overwhelmed by panic and anxiety when the currency lost its value against the dollar. One dollar equaled fifty Syrian pounds in 2011. Today, it equals 3500 Syrian pounds.

Hunger is starting to kill us. And the corona pandemic has not helped. The lady leaving our house with a bag of 12 pads, was a frightening, dramatic and solemn scene all at the same time.

It is a scene made up of two heroines: my mother and the lady whose name we never knew, who burst out in tears at our door, because the bag in her hand was like a dream, which would give her and her daughter hygiene for at least a week.

Still, that would not stop her from picking up any old rags on her way home. What I learnt from her conversation with my mother was that her daughter is 27 years old and completely paralyzed, unable to leave her bed.

This is just one of the many stories from the tragic reality that has imposed itself on the lives of Syrians. It has forced them to come together, trying to keep their bodies and souls as clean as possible.

In Syria, society is being dismantled and reconstructed on the basis of poverty, destitution, and the daily struggle to meet one’s basic needs. Syrians have a distinctive body language when they crowd in front of the bakery, piling up their bodies, as if becoming one big lump. Likewise, they crowd together, rushing bodies, when they are in search of rags, towels and milk cartons.

Sanitary pads have been missing from Syria for a long time, as the country is waiting for international aid and goods from abroad to arrive. I still remember my mother’s anxiety. 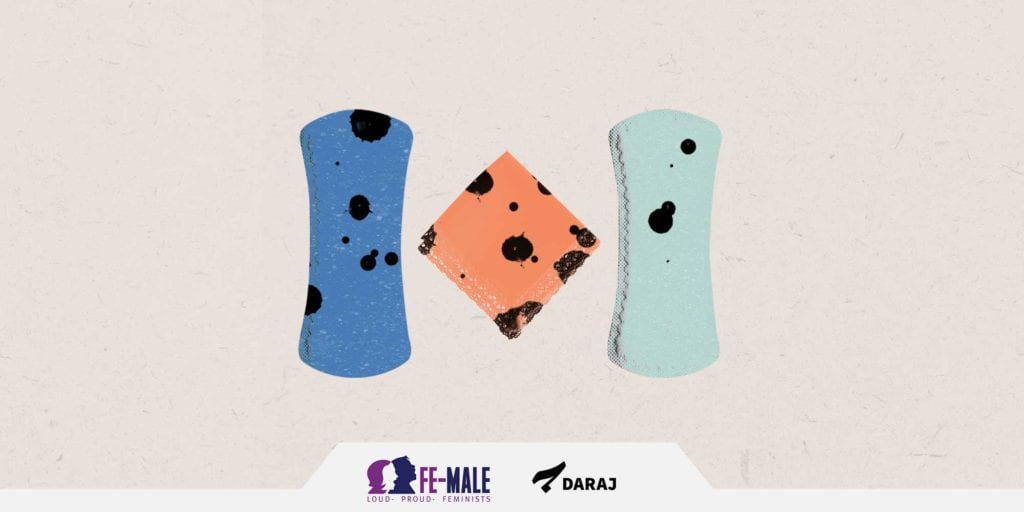 It is the worry of “filth,” of the burden of cleaning and laundering worn-out rags, of having the water cut off for days, of not being able to clean the sick, and helpless.

The Syrian regime bans the import of pads, as they are considered luxuries that rank low on the list of daily needs. As for the pads produced locally, they are of an inferior quality, like poorly made nylon bags that do not prevent leakage.

In the first years of the Syrian revolution, thousands of families suffered from the high price of sanitary pads which was a direct result of the high exchange rate of the dollar. It forced the exacerbated families to make a trade off: buy pads or food.

The average salary of a Syrian employee is not enough to secure food supplies for one month, so how can it be enough to buy pads?

People’s fear of losing pads turns into a real panic when they look at the condition of their patient or child. Civil and humanitarian institutions were established, which work in secret to support families with special needs.

Meanwhile, thousands of young Syrians gather at the doors of charities for old people and newborns in search of pads. The price of one is about 1,000 Syrian pounds, which makes it very difficult to secure them on a daily basis. The poverty rate in Syria, according to recent statistics, has reached nearly 80 percent, despite the efforts of dozens of associations supported by humanitarian organizations, local and international relief agencies.

Since the beginning of the revolution, and the waves of displaced people flooding Syria, international programs have supported families with food and health aid, primarily the United Nations High Commissioner for Refugees (UNHCR), the International Organization for Migration (IOM) and International Medical Corps (IMC).

From 2014 onward, when the Syrian currency collapsed, which severely affected the poor, the Syrian government stopped focusing on people’s daily needs and prioritized state violence and security. The Syrian state has not supported the country’s most needy and vulnerable. Rather, it offered a minimal path through governmental institutions and charities, and turned them into pathetic, and perhaps repulsive, beggars.

This oppression is a daily state of terror for the people. It is a revolution of poor mothers who are searching in silence for what is appropriate to guard their children’s health and hygiene. I met dozens of families who, without the support of humanitarian organizations, would not be able to provide for themselves and their children. It is ironic that the salary of a civil servant or employee is not even enough to secure a sanitary pad every three days. Living in Syria means being on your own and living in need of the bare minimum that preserves a human being’s dignity and social presence. There is no state, as it is unable to offer the bare minimum proving its existence.

The Syrians no longer hope the world will stop supporting the Assad regime. Their greatest hope is to preserve what remains of their dignity and the dignity of their children. Dignity they can secure with the simplest means of personal hygiene: a sanitary pad. 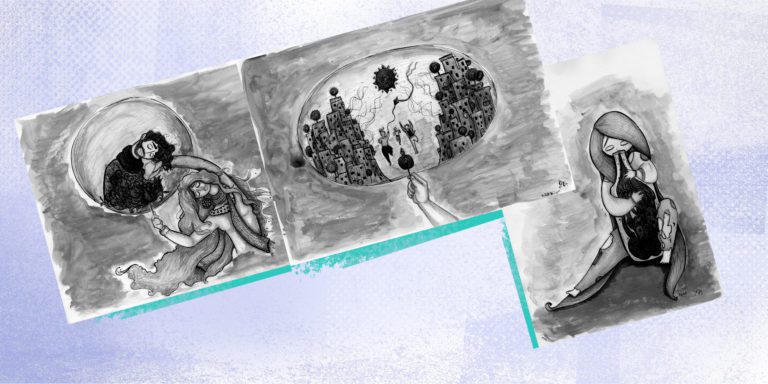