Diana Moukalled
Lebanese Writer and Journalist
October 21, 2021
Menu
The battle against the Beirut Port investigation has never been so blatantly straightforward as it is today. Hezbollah has decided to use the families of the victims in a way that militants use human shields at the heart of the battlefield.

He spoke slowly, one breath at a time, his eyes glazed, as he was referring to, of course, Hezbollah Secretary General Hassan Nasrallah, echoing the claim that his son was killed in a battle against Israel. And therefore, it would be impossible for him to be involved in such a crime as the Beirut Port explosion.

He is Hassan Amin Atwi, brother of Ibrahim Amin Atwi, one of the many victims in the explosion. While watching the video distributed by Al-Ahed News, one of Hezbollah’s media arms, I prepared for my meeting with the young man, who I first met a few weeks ago for an article about the families of the victims of the port explosion.

What Hassan told me now is the exact opposite of what he said a few weeks ago when I visited him and his family at their home in Bourj al-Barajneh. At the time, he uttered some high-pitched words against the whole political class, including Hezbollah, and blamed them all for the explosion. He even called the party a “false” party affiliated with regional power hubs.

His family members told me at the time that they had received visits from party officials instructing them not to speak publicly about Hezbollah and its leader when it comes to the port explosion. The family then said they would not abide by it. I heard the same thing from other Shiite families who lost a relative in the explosion.

Anyone who visits the humble home of the Atwi family, who only have a picture of their son left to adorn the corroded walls of the house, will only get a sense of double oppression: overcoming loss and bereavement on the one hand and social and political pressure on the other, which has translated in a young man like Hassan becoming a mouthpiece for Hezbollah.

It is the kind of intimidation the party has practiced against anyone who dares break the consensus in recent years, which took a most insulting shape during the 2019 October uprising through what has become known as the “before the slap” and “after the slap” phenomenon: Everyone who criticized an official or important figure in the party, especially its leadership, was led to publicly apologize by video in a quite insulting manner.

What happened to Hassan Atwi previously happened to Ibrahim Hoteit, spokesperson for the relatives of the victims of the blast, who used to be known for his stinging comments towards the “Shiite duo,” especially the Amal Movement and its leader Nabih Berri.

This exposed him to repeated attacks, especially after the events of Tayouneh Square and Nasrallah’s statements afterwards.

The battle against the Beirut Port investigation has never been so blatantly straightforward as it is today. Hezbollah has decided to use the families of the victims in a way that militants use human shields at the heart of the battlefield, forcing their opponents to kill them first before being able to target the fighters.

This is what is happening to the families of the victims, who have been put at the forefront of the battle against the judiciary in an attempt to obstruct the investigation into the port explosion.

It is today an outright confrontation. Hezbollah wants to abort the investigation at all cost, and it is not unlikely that we will find it forming “revolutionary courts,” similar to what the party’s Iranian sponsors do, in order to neutralize any objection against its weapons, including ammonium nitrate. Attacking the investigation, while relying on some 100,000 fighters, Nasrallah has declared Hezbollah was ready any time.

It is forbidden to rise up against the ruling junta, which has formed an umbrella to protect Hezbollah’s arms. Any protest must be divided by preventing Shiites from participating or even pushing them to attack under the slogan of “Shiite Shiites.” 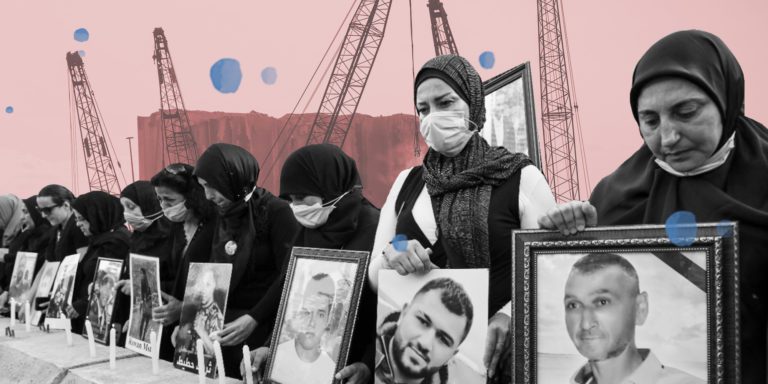