Syria: Stories of the Disappeared

Carmen Kareem
Syrian Journalist
31.08.2021
Menu
There are more than 130,000 people missing in Syria, which means there are 130,000 families living between hope and despair, waiting for the faintest sign of life …

“The scariest moment was when I called him for the 2nd time, but his line was out of service,” said Rama (a pseudonym), describing the day she and her family lost contact with her brother. Many more attempts followed, but his phone remained switched off.

After the 2012 Daraya massacre, in which an estimated 400 – 500 people were killed, the family was forced to leave town, not knowing their son’s fate. Did he die under the bombings or did the regime take him to one of its prisons? Despite many promises since his disappearance, there has been no news since.

Every missing or forcibly disappeared person has a life he left behind. And this is what hurts their families the most. The last cigarette he smoked. The way he threw his clothes on the bed. His mobile phone, his shoes, his perfume bottle, his notebooks, his books.

Personal belongings torment the families of the missing, as they have to face the loss of their loved ones every time they pass their room. Most families did not abandon the belongings of their children, not even the simplest ones, such as a toothbrush or a razor blade. Everyone remembers the last thing the missing person told them. And these phrases are repeated in every session every time they remember him or her. Sessions that always end up in tears.

Thousands of families are lost and confused about what they should do after all these years. Should they give up hope and accept the death of the disappeared? Or should they continue the often futile search? Yet, when they stop searching they feel the torture of conscience, as the disappeared may still be alive somewhere.

“The security forces took my brother Ahmed five years ago and we know nothing about him,” said Fatima (a pseudonym). “And to this day my mother refuses to tamper with his room, as if he will return tomorrow.” The pain of losing someone who disappeared does not diminish with time. The same questions are repeated every day. Where is he? Is he alive? What does he eat? How does he sleep? What does he drink?  And questions fueled by terrifying fantasies about the possible end of brothers, children and parents, as well as hope.

“Every time the phone rang, it was him,” Umm Ahmed described the waiting for her son since five years.  All she wants is for her son to be alive, somewhere, but at the same time she said: “But if the villains are torturing him, then death is more comfortable, isn’t it?”

Ahlam (a pseudonym) lost contact with her husband after the 2013 attack by extremist Islamic groups on the industrial area of Adra. He was working in a cement factory. She received some news.  He had been taken hostage alongside several others to work and dig tunnels. She actually has a picture of him, signed with his name and the date he was kidnapped.

Ahlam had given birth a month before her husband went missing. Today, her son is 8 years old. She has struggled since raising her children alone, while waiting until her father finally forced her to leave the children at their grandfather’s and file for divorce from her husband. Ahlam still suffers, yet faces her fate having experienced such an early loss in its most severe form.

Salma (a pseudonym) fears that, day by day, she will forget her husband’s story. “I am afraid that I will forget what happened,” she said. “That a day will pass without remembering what we experienced. I feel ashamed and angry at myself.”

There is no future for the families of the disappeared. They are completely stuck in the past, as their lives have turned into a search for hope and loss. “It cannot continue, but there is no other way,” said Salma. Surrender means accepting the death of the disappeared. But in that case they need at least a body they can put in a grave. Stay between the shores of life and death, hope and despair, is what many families cannot bear any longer.

After losing her father, Aya developed violent reactions. She initially refused to go to school and developed symptoms very similar to a post-traumatic stress disorder and separation anxiety disorder. This caused her a lot of problems at school. She refused to approach any other children or interact with any of her friends.

Her mother said that her children are still unable to comprehend the loss of their father. Their questions become more difficult every day and are accompanied by fear and anxiety about losing their mother as well. Any short absence of her can cause panic attacks.

Merchants of the Disappeared

The Syrian regime has excelled in transforming the dictatorship into a very profitable business for officers and arms dealers. Even the forcibly disappeared have become business. Anyone connected to the regime, and able to reach the detainees, has turned a dealer of their news. The price of news about a missing person is a handful of money. One phone call may cost millions. Seeing someone for ten minutes will cost many times more.  Sometimes families need to ascertain whether the missing person is within the system or not, so that their families can continue their search there or elsewhere.

Once, Syrian security forces arrested a member of a tribe in the city of As-Suwayda. His family did not know where he was taken to. They contacted a lawyer with a network of security relations.

Thus they managed to hear their son’s voice. Then came the promises came that he would be released within three months. The family sent large sums of money to the lawyer, in exchange for his release within a week. The lawyer called two days later to tell them their son had died. A family was given hope for three months before their happiness was kidnapped from them forever. The family could not even reach the body of their son. What happened was just a trick to get their money before their son was killed.

“We sold all our possessions,” Mohamad (a pseudonym) said. “At first my mother sold what she had left of her jewelry. Later we sold our car. Then we started selling the house in the hope of reaching my father.”

Eight years after his disappearance, the family has still not received any information about the man in his sixties. At the same time they have lost everything they owned and live in poverty. When brokers learn of people’s desire to sell the house or furniture to obtain news of a detainee, they downplay the price of the house and offer only small amounts of money for the furniture. It is as if everyone turns into exploiters who want to get their share of the forced absence.

“When I sold the house, I had great difficulty finding a good price,” Mohamad said. “Everyone is taking advantage of your need for money, trying to get your house at the cheapest price.”

There are more than 130,000 people missing in Syria, which means there are 130,000 families living between hope and despair, waiting for the faintest sign of life …  Editor’s note: to protect the people we spoke to, all names are pseudonyms. 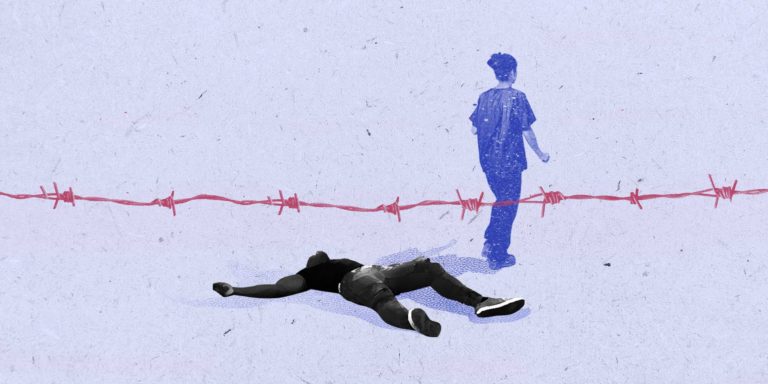