As a Mother, I Wish I Could Silence the Sea

What do we, who haven’t grown up, do?It’s a question I see on the face of everyone I know and everyone I meet by chance. A question we ask and wait to be answered by someone. For a year, those of us who did not die were ashamed of asking this question.On August 4, its been 365 days since that day, the day we stayed alive but were no longer able to live.

Coincidence prevented the death of me, my husband, my family, colleagues, and many friends who I love and who love me. Coincidentally, the minimum level of psychological security that we struggle to maintain, or fake, has come to pass. Coincidence made us, as individuals and a society, open doors to all kinds of violence and aggression, made us “homeless,” as novelist Jabbour Douaihy, who passed away this month, would have said.

And this tragic coincidence forces us to fake positive feelings from it, as if we feel grateful. For example, because our loss is less when we compare our pain with the pain of others, or face a torrent of possibilities of “what if.”

What if I were in my office? What if me and my family were still downtown, and had left at 6:30? What if we were sitting on the balcony where all the flying glass from neighboring buildings landed? What if I had taken my daughter for a bike ride around the port?A torrent of ‘What If’ questions has left me confused by the carnage the explosion caused. A confusion that forced me to develop a feeling of gratitude for this “explosion carnage serendipity” because it spared me and my family from a greater tragedy.

But it was a coincidence that kept us hovering between life and death, many friends say. Do you remember how the explosion blew into our houses through doors and windows? We have become like this house, constantly being stormed, without supervision or accountability.

We receive the storm because we do not have a choice not to receive it. It is a storm that does not respect the sanctity of the house, nor privacy, that tampers with the past and present and encroaches even on the future, or rather it encroaches on my future, ours, and the future of my city Beirut.

I find myself avoiding watching any video of the explosion-carnage. Despite the harshness of the images, the explosion re-establishes its power.Even a whisper became suspicious. Every whisper is a muffled sound from under the rubble, a stifled tear from a family members, a prelude to the explosion.

On August 4, 2020, I can almost believe that I heard a whisper, before this resounding voice, which was followed by a suspicious silence, which created a strange feeling about both sound and silence. So where do I flee to?

I only realized the power of the voice through my daughter, who was three years old at the time. In the first few days after the explosion, she told me that the rustle of the trees frightened her. She specifically said that the trees frightened her. And, surprised when I told her that she loved trees, she explained she did not like the sound they made. She pointed from her window to the trees explaining that they made a disturbing sound when they moved in the air.

Even the waves of the sea. I remember we went to the sea two weeks after the explosion, and this trip did not make my daughter happy, as she was disturbed by the sound of the waves hitting the rocks. She described it as “a frightening noise” and asked me to make the sea shut up.

As a mother, I wish I could silence the sea. How do I explain to my daughter that, although it protected us from a greater catastrophe, we became afraid of its voice and its silence at the same time?

This is the first time that I write about the explosion – the mass massacre we were all exposed to and still face the consequences of – in my language.

I have written more than once on this subject in English, a language in which I can control the emotional part of my brain more. For example, I wrote about corruption based on analytical indicators developed by research centers and international institutions and on the phenomenon of a failed state. Yet, I never wrote anything in my mother tongue, because I am a mother. And the August 4 explosion and massacre made me a fragile mother. And with this fragility, my mother tongue also became fragile.

With all my verbal ability, I cannot find the right words, phrases, and figurative images. I still don’t know how to get them back. And so my writing today is nothing but a miserable attempt by me to recover my mother tongue. 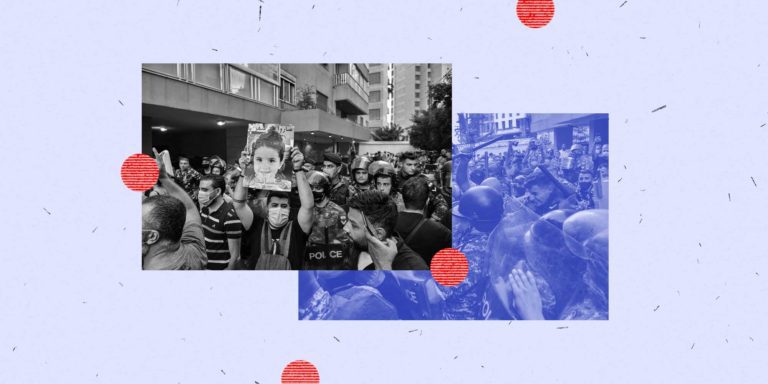