Daraj
July 1, 2021
Menu
He was not political. He mainly worked for charitable organizations. And yet on September 2, 2018, he was assassinated in the Old City of Taiz. The bullet came from the Cairo Citadel …

“What was the reason for his assassination?” asked Ilham, slain journalist Muhammad Al-Tahri’s sister. “And where did the bullet come from? He never carried a weapon. He carried a camera. His camera was his weapon.”

“And how did the bullet come from behind, from the Cairo Citadel?” she continued in an interview shortly after the murder. “The citadel was under control of the Abu al-Abbas Brigade at the time. Why target my brother?”

Ever since, Ilham has refused to talk about the crime even when new information or developments were revealed. Some of the journalist’s friends believe that his family has been threatened to prevent them from talking.

On September 2, 2018, at 22.30 in the evening, photojournalist Mohamed al-Taheri, received a phone call from a resident in the neighborhood asking him to help a woman having complications giving birth. She needed to be transferred to the Muzaffar Hospital in the old city of Taiz.

Al-Taheri did as he was asked. Before reaching the hospital, he was shot by a bullet from behind. He was taken to the Muzaffar Hospital, but was declared dead upon arrival. Forces belonging to the Taiz Military Axis, a group of military brigades affiliated with Yemen’s internationally recognized government, accused the Abu al-Abbas Brigade of the murder, while the latter blamed the Yemeni Congregation for Reform Party (Islah), which is part of the main axis. Supported by the United Arab Emirates, the Salafi Al-Abbas Brigade split from the coalition in 2017. That same year, its leader was labelled a terrorist by the US Treasury.

Al-Taheri is one of dozens of journalists who have fallen victim to the armed conflict in Yemen, while the perpetrators generally escape punishment, as the authorities fail to conduct an investigation. This prompted our investigative team to go into the field to talk to friends, family and eyewitnesses in an attempt to uncover the truth over the course of 5 months.

Our team arrived in the old city in Taiz and tried, first of all, to meet with the Al-Taheri’s family. However, Mohamed’s sister Ilham categorically refused to talk about the incident or the events leading up to it. The team contacted her more than once.

However, the team did manage to meet “Amani,” a pseudonym for another of Mohamed Al-Taheri’s relatives. She confirmed our suspicion that the family had been threatened by people affiliated with the Abu Abbas Brigade.

According to her, Al-Taheri’s photography was limited to websites and nongovernmental organizations. Nicknamed “the sniper,” he was interested in exposing the humanitarian suffering in the city due to the war with the Houthi Movement and the armed confrontations between the Abu Al-Abbas Brigade and the military police.

“Mohamed’s story got lost between the reformists accusing Abu al-Abbas and vice versa,” she said. “The state did nothing for us. And in the end we could only put our trust in God’s command.” She claimed the authorities did not even conduct a routine investigation into the incident. She also said the family never received a hospital report. They also preferred not to claim one, because of the precarious security situation in the city.

“It is not possible to just accuse any party,” she said. “But all people close to Mohamed said that the bullet came from the Cairo Citadel, while there were no confrontations at the time.” 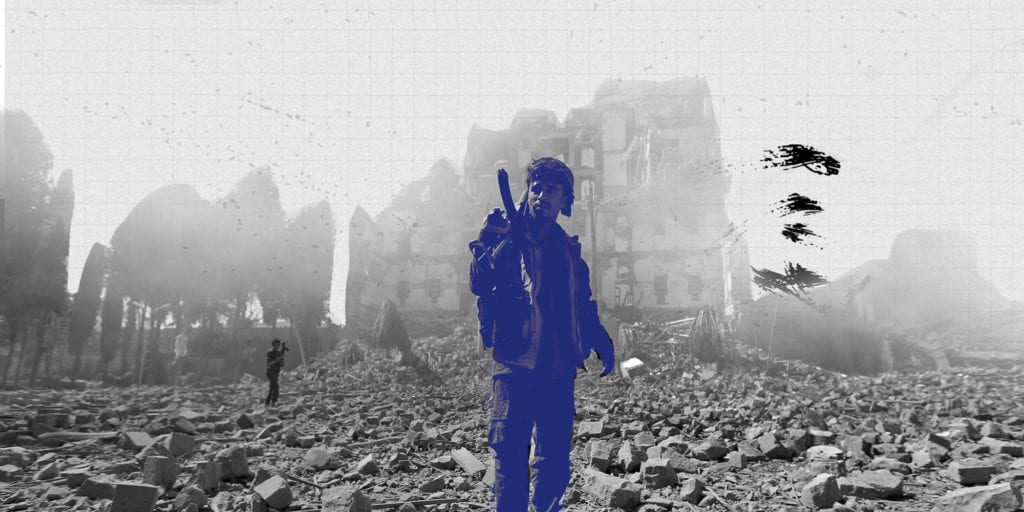 Majed Muhammad, a pseudonym for one of Al-Taheri’s colleagues, confirmed that the authorities never followed up on the incident. According to him, a forensic doctor did offer to perform an autopsy, but asked the family for a sum of money that was way beyond their means. When it became clear he would not get paid, he refused to do his work.

Our investigative team contacted Al-Muzaffar Hospital to find out more about Al-Taheri’s death. The hospital apologized for the lack of a medical report. When asked why – as it is routine to issue a detailed report in case of a crime – the hospital declined to respond.

“If the shot was from a close range, then the Abu al-Abbas Brigade was involved, and if it was from a distance, then it was arguably the military police,” said a doctor, who was part of the Al-Muzaffar Hospital staff at the time, in an audio recording. As he is currently working for a medical team affiliated with the Al-Abbas Brigade in the city of Mocha, he preferred not to be named.

He suspected the brigade to be involved, as the bullet had a huge impact, which enhances the probability he was shot from close range. “What I’ve heard is that al-Taheri had made enemies with some members of Abu al-Abbas, and therefore was liquidated,” he said.

On September 3, 2018, Colonel Abdul Basit al-Bahr, spokesman for the Taiz Military Axis told the Anadolu Agency that al-Taheri was shot by a sniper next to the Muzaffar Hospital. He was killed instantly. He added that the journalist was murdered in an area under the control of outlaw elements – a reference to the Abu al-Abbas Brigade. He did not offer further details.

Mohamed Shamsan (a pseudonym), one of the friends who took al-Taheri to the hospital after he got shot, said al-Taheri had received many threats during the armed confrontations in the old city.

Shamsan added that Al-Taheri one day told him the situation in Taiz had become so catastrophic that he was thinking about leaving for Aden or any other governorate.

“Mohammed did not belong to any political faction,” Shamsan stressed. “He was only interested in photography and charitable, humanitarian work.” Shamsan too held the Abu al-Abbas Brigade responsible for the killing. Its fighters controlled the entire old city, he said, and they knew everything about people living there, including journalists, activists and human rights defenders.

According to one doctor’s testimony, Al Taheri was killed by a 9mm bullet. Seeing the accuracy of the hit, the extent of the damage and taking into account it was night, the doctor, who declined to be named for security reasons, believed the bullet was fired from very close range.

He added that the Abu al-Abbas Brigade entered the hospital half an hour after Al-Taheri’s body had arrived and met with the doctors handling the case. He also said the medical report was taken from the hospital and that doctors were warned not to talk about the incident.

According to him, the Abu Abbas forces even prevented al-Taheri’s friends and family from entering the hospital until the early hours of the next morning and asked them to bury the body without further delay.

A map showing which parties controlled the old city at the time, confirmed that it was the Abu al-Abbas Brigade that on September 2, 2018, controlled the Cairo Citadel and surrounding areas, while the military police controlled the Al-Arous area in Jabal Sabr. Both areas are located in the direction from which the bullet was fired. Al-Taheri was killed near the Muzaffar Hospital, which at that time was 680 meters away from the nearest point of the Abu al-Abbas Brigade’s forces situated at the Cairo Citadel.

As the range of most snipers does not exceed 1800 meters, certainly not with night vision, it is very well possible al-Taheri was shot from an area under control of the Abu Abbas Brigade.

Our team also reached out to an administrator of the Muzaffar Hospital, who was present on September 2 when al-Taheri’s body arrived. He confirmed in an audio recording that members of the Abu Al-Abbas Brigade entered the hospital during his shift.

He also said they cut off one road leading from the district of Ashrafiyah to the hospital. He furthermore confirmed that the Abu al-Abbas Brigade had concealed a preliminary medical report to prevent the hospital from spreading information.

“The Abu al-Abbas fighters said that anyone taking pictures is subject to investigation,” he said. “They also said: ‘we don’t want any news about this incident. We want it to be over quickly and respect the martyr’s sanctity.”

Upon arrival at the hospital the Abu al-Abbas’ forces also prevented any media from covering Al Taheri’s death. Our team contacted the Abu al-Abbas Brigade and some officials who used to work for them. We presented our findings, but they failed to respond.

The Al-Taheri case, which the state authorities failed to properly investigate, while friends and family were threatened to prevent them from speaking up, only confirms that in a war-torn and lawless country such as Yemen, the journalist remains one of the most at risk professions …

This investigation was produced with the support of the Gulf Center for Human Rights as part of its Investigating Impunity for Crimes against Journalists in the Middle East and North Africa Project. 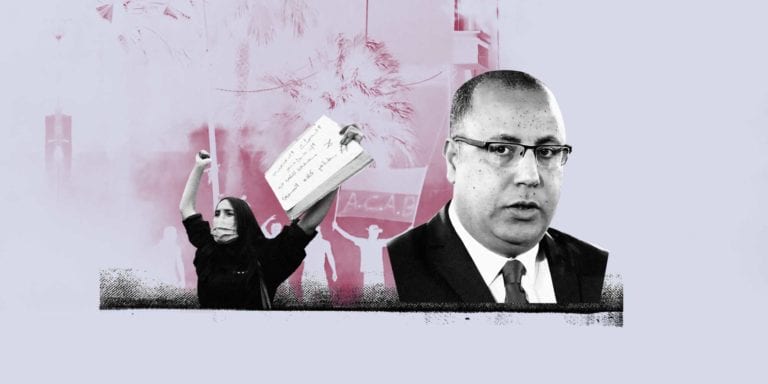