Hani Mohamad
Egyptian Journalist
June 23, 2021
Menu
Anything goes in Egypt’s theater of the absurd. Two young girls have been sentenced to up to 10 years behind bars for promoting the Likee app on TikTok. A Cairo judge qualified it as “human trafficking.”

“Why this slander and fabrication? I mean, I am a human trafficker? I don’t even know what that means. That’s a big, strong word.”

20-year-old Hanin Hossam appeared desperate and in tears in a short video following the devastating verdict against her and Mowada Al-Adham. Known as the “Tik Tok girls,” they were convicted to ten and six years in prison respectively.

Hanin just could not understand what had happened to her. Why this persecution and demonization? All she and the 23-year-old Mowada did on TikTok was invite girls to post on the popular Likee app, a video sharing platform that is completely legal in Egypt.

Likee is owned by Singaporean firm BIGO, which operates in Egypt from its official headquarters in Cairo, like so many other international companies that have a branch in the capital. And if a company is licensed to open and operate, and its activities do not violate the law, how can Hanin and Mowada be accused of human trafficking, while the company’s offices remain open?

If the two Egyptian girls are involved in human trafficking, then the organization that runs the entire Likee operation must be responsible. But because it pays taxes and fees to be able to operate in Egypt, it is protected from accountability. Some of the firm’s Chinese officials faced accusations, but they were rapidly acquitted and released on bail, leaving Hanin and Mowada alone in the corner.

The truth is: you can’t ask for justice in Egypt. Justice is what the authorities want it to be. It is sanctioned by customs and traditions, no matter how contrary to logic, justice, the spirit of the law and even the law itself the matter is. So much is clear from the verdict against TikTok girls Hanin and Mowada.

The state uses the judiciary to impose its control over women, turning what should be a just arbiter into a party in the dispute. As such, the state stands accused of oppressing part of the Egyptian population based on gender.

The TikTok girls are part of a trend that has become apparent through several cases. The accused in the Fairmont gang rape case have virtually been acquitted. The attacker of the “mall girl” Sumaya Obeid, whose facial injuries resulted in over 40 stitches, received only a one-year prison sentence.

While they and many others receive an acquittal or reduced sentences, Hanin and Mowada got 10 years and 6 years respectively for a crime they did not even commit …

According to Egyptian law, human trafficking is a crime that consists of three elements:

An act of trafficking: “including selling, exposing for sale, buying, promising to sell or buy, using, transporting, handing over, harboring or receiving a person, either inside the country or across its borders.”

Committed by certain means: “using force or violence or threats thereof, or by abduction or fraud or deception, or the exploitation of a position of power or the exploitation of a state of weakness or need, or the promise of financial compensation or benefits in exchange for the consent of a person to the trafficking of another person he/she has control over.”

The TikTok girls did not exploit anyone, did not push anyone to work in prostitution, forced labor or pornography, they did not steal organs, neither by force nor consent, not with violence or threat. So, if it cannot be proven they bought or sold human beings, what is left of the accusation? This case cannot be separated from the lack of awareness of technology and (social) media within the judiciary and security services. Presenting an ad for an app does not mean forcing others to do anything.

An app allowing for communication between the sexes, like so many other apps, is not offering room for prostitution. Any app, including Likee, can be used to do anything from spreading information, or selling one’s body, or reciting poetry. 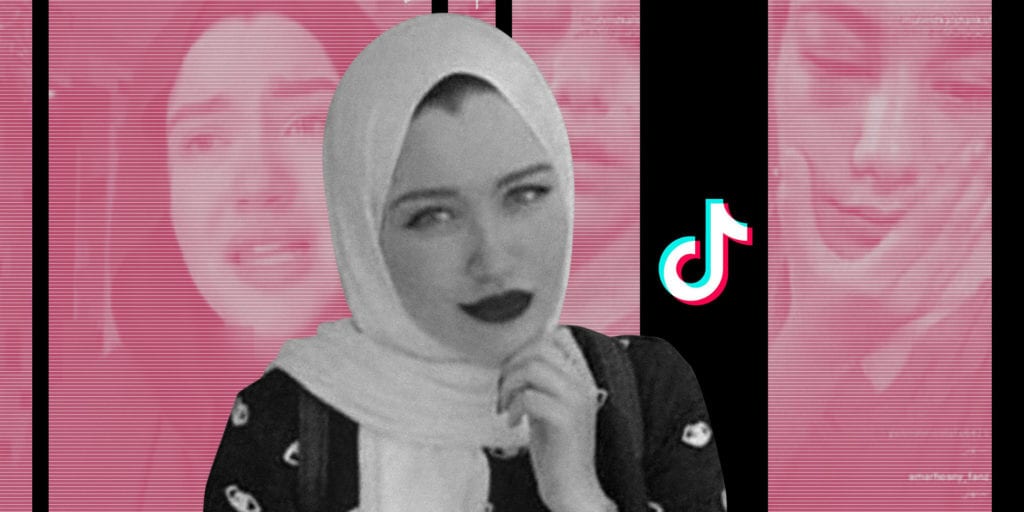 No Logic nor Law

The harsh treatment of the two girls is not just a response to a “violation.” It is the state wanting to appear as “the protector of morals, virtue and values.” This in turn guarantees the support of conservative groups in society, which perceive the state as “the good father, who preserves the values ​​of the home.”

On the other hand however, there is no objection to “an ear pinch” for “naughty boys.” However, the state should maintain cohesion by staying away from liberal ideas, let alone social rebellion.

If the judge was asked about the evidence brought against the two girls, what would he present? A collection of written conversations and childish videos? Ads for an international company that operates from Cairo with official approval?

Although what happened was related to the Likee app, the two girls who are being prosecuted were famous for their videos on TikTok; Hence the name “TikTok Girls.”

The association with TikTok serves as a warning for any girl wanting to use this very popular app in Egypt. It has turned into a “hidden flood” penetrating homes, attracting children, adolescents and adults, greatly enhancing the space for freedom and rebellion. Girls here can dance, sing and tell stories. They are able to test their body language in videos, without any censor or system blocking them.

They speak directly in front of the camera, without distinction. A woman living in the slums of Upper Egypt can enjoy what a girl in a prestigious suburb as the Fifth Settlement enjoys. There is no difference between them. It did not take long for the authorities to threaten women with “potential scandals” and “intractable cases” if they dared express themselves on the app.

The title “TikTok victims” is not limited to Hanin and Mowada. There are many other girls serving sentences in women’s prison due to TikTok. Most notably among them: Manar Sami, Renad Emad, Hadeer Al-Hadi, and Sharifa Refaat, as well as Sherry Hanim and her daughter Zumuruda. “ TikTok has turned into this open door to enter a women’s prison. In sharp contrast, not a single man has ever entered prison based on a TikTok post. Worse: many harassers and rapists remain free.

What is also strange is that we do not see any solidarity campaigns, vigils, or protests against the girls who were taken from their bedrooms to prison and often were forced to sign confessions formulated for them. Meanwhile, Egyptians are in solidarity with football player Amr Warda, who is facing dozens of accusations of sexual harassment, and they defend singer Tamim Younes, who was accused by his ex-wife of marital rape.

Such bias reveals the real reason behind trapping women, leaving them alone to face their fate behind bars. Dozens of women in recent years have been jailed for standing up against online sexual harassment. Gay people have suffered stalking by security forces, and transgender people have also been tortured.