Lebanon: “The People Are Hungry, and the Worst is Yet to Come”

Myriam Sweidan
Lebanese Journalist
March 10, 2021
Menu
As a consequence of the unprecedented currency crisis, Lebanon is falling hungry. And the worst is yet to come …

“Meat, cheese and fruits are all items we’ve been cut off from for a very long time,” says Sawsan, as she runs from one store to the next looking for the subsidized sugar her neighbor told her about in the morning.

Sawsan is a housewife and mother of three daughters, the eldest of which is no older than 16. Her husband is unemployed, after the car with which he transported people broke down a few months ago and he cannot afford to fix it.

Sawsan says most of their meals are restricted to vegetables. She goes to a store at night to get the leftovers of the previous day for a cheaper price. She prepares modest dishes and now substitutes a meat stuffing with parsley and tomato.

“I’m stuffing cabbage leaves with vegetables, and sometimes I substitute meat with spices and oil.”

Sawsan points out that she goes to the store early in the morning to get subsidized goods. However, most of the time she fails, as the shelves are empty before 8AM.“I look for subsidized goods knowing it’s all a big lie,” she tells Daraj. “I used to buy fava beans for 750 LBP and today they cost 4500 LBP, and they say they are subsidized. So, where’s the subsidy? I’m no longer able to provide my kids with a dish of canned fava beans.”

Daraj has gathered many stories like Sawsan’s of people who can barely provide food for their children. One person said she asks the vendor to give her the remaining salt water in an empty cheese container, so she can wet the bread for her children. Or she pulls out some herbs from the field near her house to make a pie.

Another person stands at the door of the pharmacy asking for medicine for his sick son, yet leaves empty handed when knowing the price, saying: “I’ll make tea to make him heal.”

We only realize the extent of the catastrophe that has hit the Lebanese, if we compare the current collapsed currency rate of some 11,000 LBP to the US dollar and the rate in September 2019 when it amounted to some 1500 LBP to the dollar.

This means that the average monthly income, which stood at some 700,000 LBP or $470 at the time, today equals some $64. All this has made the Lebanese rush to buy subsidized products and sometimes store them. Recently, a video went viral on social media showing shocking scenes of people fighting over a box of powder milk that was still on the list of subsidized items by the government.

However, the government is no longer capable of carrying on with subsidies or providing basic goods for the Lebanese due to dwindling foreign currency reserves at the Lebanese Central Bank (BDL). This will no doubt expose even more Lebanese to poverty and hunger.

However, the government is no longer capable of carrying on with subsidies or providing basic goods for the Lebanese due to dwindling foreign currency reserves at the Lebanese Central Bank (BDL). This will no doubt expose even more Lebanese to poverty and hunger.

Furthermore, the fights over subsidized goods are arguably just beginning, especially seeing the fact that many goods are not available in sufficient quantities. Not to mention the merchants monopolizing goods, and outsmarting any economic plans, to exploit citizens’ needs. Some shop owners send their employees to bigger stores to buy whatever subsidized products they can, in order repackage them and sell them according to market prices.

And all this while there is still no sign of activating the finance card promised by the government, and which is expected to encompass some 700,000 families. This means it will cost 6.7 trillion LBP, given that the conflict over the card’s source of financing is ongoing.

Every day that passes without reaching an agreement on the card means the depletion of more dollars on a subsidy that does not reach the people who deserve it.  In this context, the Crisis Observatory of the American University of Beirut issued a report clarifying that “the worst is yet to come” regarding  the collapse of the LBP.

It also clarified that solving the current crisis requires many steps, the most prominent of which are to reconsider the current functioning of subsidies, to continue subsidizing basic goods like wheat given its importance for food security, and to speed up a general assembly of the parliament in order to adopt the loan offered by the World Bank to initiate direct monetary support for approximately one third of the Lebanese people to cover part of their basic expenses and not fall into extreme poverty.

The President is Innocent

As the value of LBP decreases to unprecedented levels and the Lebanese fight over a box of milk or a bag of rice, President Michel Aoun addressed the public requesting the security services reveal their “plans to harm Lebanon.” He blamed foreign parties and platforms for “damaging the currency as well as the status of the financial State.”Caretaker Prime Minister Hassan Diab also declared himself innocent, stating that “someone is pushing Lebanon towards explosion.”He also said he can no longer stand this negative image of Lebanon and threatened to step down in order to put pressure on the formation of a new government.

“I’m stuffing cabbage leaves with vegetables, and sometimes I substitute meat with spices and oil.”

This all came after protestors declared a “rage Monday” closing down roads all over Lebanon in protest against the economic decline. Protests are on the rise since last Tuesday, after the LBP witnessed a historical collapse with the exchange rate for $1 exceeding 10,000 LBP in the parallel market, while the official rate still stands at 1,510 LBP.

These developments were discussed during a meeting held by army commander Joseph Aoun, who seemed firm about not clashing with the citizens and protestors. According to him, the socio-economic reality puts the military, its officers and the people in the same box, because the livelihood crisis affects everyone.

“The people are hungry,” he said. “And the military is also hungry, and suffers. What are the officials waiting for?”

This ‘rebellion’ is considered a first in Lebanon and has pushed the Lebanese, having lost all hope with the current leadership, to ask the military to take over, thereby seemingly forgetting the current reality of several countries in the region where the army took over. As protests broke out in the light of the new price increases, it seems saving the LBP is now out of reach, given there is a corrupt sectarian elite trying to either demonize the angry people, who are only demanding their basic rights to live in dignity. 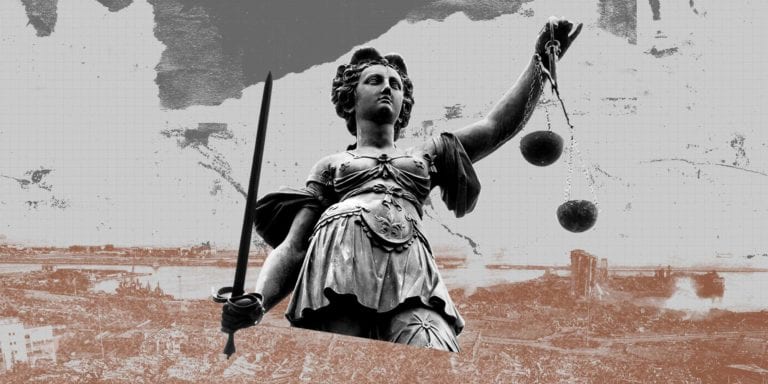