Being Gay in an Egyptian Prison: Prepare for a Life of Torture and Abuse

Ahmad Mohammad
Egyptian Journalist
February 10, 2021
Menu
“Homosexuals are beaten and physically violated. The reason is that the authorities perceive homosexuality as a moral and sexual deviation for women and a breach of manliness for men.”

“During the years I was imprisoned, I found myself a close friend,” Ibrahim, who was jailed in Port Said General Prison from November 2014 until December 2016, told Daraj. “The other prisoners noticed our intimate relationship. We denied we were gay because we feared the consequences. But the prisoners informed the prison administration anyway, and we were punished. After that, they separated us and sent us to different cells.”

Ibrahim faced harsh conditions in Egypt’s prisons, like tens of thousands of other detainees. His sexual identity, however, exacerbated his suffering. Gay prisoners face additional penalties, as well as verbal and physical abuse.

Human Rights Watch on October 1, 2020, published the report  Imprisoned For Raising the Rainbow Flag, named after the infamous incident during a 2017 Mashrou Leila concert in Cairo. 21-year-old Ahmed Alaa had dared to raise a rainbow flag, which led to the arrest of 75 LGBT people from their homes and through dating apps.

“Egyptian police and National Security Agency officers arbitrarily arrest lesbian, gay, bisexual, and transgender (LGBT) people and detain them in inhuman conditions, systematically subject them to ill-treatment including torture, and often incite fellow inmates to abuse them,” HRW wrote. “Security forces routinely pick people off the streets based solely on their gender expression, entrap them through social networking sites and dating applications, and unlawfully search their phones. Prosecutors use this content to justify prolonged detentions as they rubber-stamp police reports and bring unjustified prosecutions against them.”

Following the flag incident at Mashrou Leila, Egyptian MPs submitted a draft law to criminalize “acts of homosexuality.” Rayad Abdel Sattar, one of the MPs who introduced the law, stated that the goal of the draft law is “to constrain the presence of the LGBT community in Egypt.”

Technically, homosexuality is not illegal in Egypt. No law criminalizes homosexual conduct as such. Instead, the authorities use Law 10 of 1961 to prosecute suspected gay and trans people. The law bans prostitution and “debauchery,” which carries up to three years in prison and three years of supervised daily release.

The 1961 Law on the Combating of Prostitution states:

“Whoever incites a person, be they male or female, to engage in debauchery or in prostitution, or assists in this or facilitates it, and similarly whoever employs a person or tempts him or induces him with the intention of engaging in debauchery or prostitution, is to be sentenced to imprisonment for a period not less than one year and not more than three years and a fine between 100 and 300 Egyptian pounds.”

The 1956 Prison Organization Law includes no disciplinary regulation regarding same-sex relationships. Likewise, the amendments regarding the 1956 law issued in February 2017, mentioned nothing regarding homosexual practices. As a consequence, it allows for the prison administration to decide on punishment as it pleases.

“I’ve seen many [gay] cases, especially in the wards for criminal prisoners, since political prisoners are more conservative,” Muhammad, a prison officer who served in Wadi al-Naturn prison, told Daraj. “Such relationships generally occur at night when the lights are turned off (which rarely happens) in empty cells, wards or bathrooms.”

“When the prison authority confirms that inmates have a homosexual relationship, a beating party is organized,” he continued. “The two are beaten in front of their cellmates. After that each one is sent to a disciplinary cell, a solitary cell devoid of everything, where they stay for several days before being separated. This process is called alienation.”

According to Samia, a former detainee at Damanhour General Prison, lesbians used to hide any behavior that might reveal their sexual identity.

“The warden threatened women who sexually approached each other,” added Hoda, a former detainee at al-Qanater Prison.

“When the guards found a lesbian in our ward, they took her away,” said Afaf, a former inmate at the same prison. “She was severely beaten before being transferred to another ward. There she doesn’t live like other prisoners. She practically lives in the bathroom, wiping floors and so on, and is treated very badly.”

There are no statistics regarding the number of homosexuals in prison, but the Doctors Syndicate and officials of the Ministry of Interior have issued some indications..

Dr. Al-Sayed Hamdi, head of the Doctors Syndicate, considered the spread of AIDS among prisoners a result of same-sex relationships. According to him, these happen because prisons are overcrowded and detainees sleep and get naked close to each other.

His statement lacks accuracy of course, as many male and female prisoners identified as gay before going to prison.

Dr. Shawqi Zarif of the National Center for Social and Criminological Research (NCSCR) conducted a 2009 study concluding that same-sex relationships only amounted to 2% of the prison population.

This was contradictory to a similar research by Dr. Ahmed Majdoub who found that the percentage amounted to some 40%. The Ministry of the Interior decided to stick to the lower estimate.

Prisons and detention centers are extremely patriarchal institutions, even when it comes to verbal expressions. Prisoners must express themselves in a very manly manner, even if it goes against their nature.

Prisoners are not allowed to speak in a soft voice or use “delicate” terms that indicate “fragility.” Prisoners who lack masculinity are often insulted and beaten.

The term “hajjeh” (Arabic for elderly lady) is used to poke fun at feminine inmates. They are also given more “feminine” chores, such as doing the dishes, cleaning bathrooms and washing vegetables.

“The prison culture among both males and females is very patriarchal and relies to a large extent on physical strength, strong language and seniority,” said human rights researcher Mina Ibrahim, who is a coordinator at the MENA Prison Forum. “Homosexuals are punished in brutal ways,” she said. “They are beaten and physically violated. The reason is that the authorities perceive homosexuality as a moral and sexual deviation for women and a breach of manliness for men.”

This report was translated from Arabic to English by Fatima Jaber. 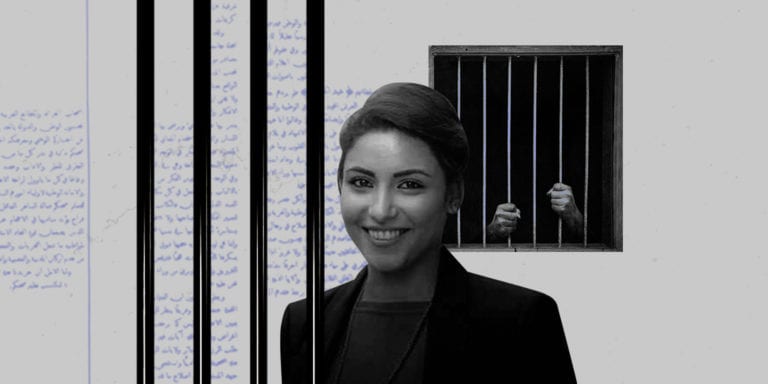