Lokman’s Family: We’re Here to Stay and Finish What He Started

Diana Moukalled
Lebanese Writer and Journalist
February 5, 2021
Menu
“This project will never be silent. They can kill Lokman, yet not his ideas. We will continue. Lokman will live forever.”

Entering the Al Slim residence in the southern suburb of Haret Hreik in Beirut was not what we expected when going to a funeral. There was no mourning, no Quran recitations, no black clothing.

The first thing we saw was a lovely little garden filled with the sounds of birds. An elegant traditional house that was not pretentious, but comforting. Near the garden, researcher and publisher Lokman Slim had transformed a formerly neglected space into the cultural center UMAM Documentation & Research, which over the years hosted many activities and meetings regarding war and memory.

On the second floor of the house, Lokman’s sister Rasha was sitting in her office reading the forensic report, while his mother Salma ensured her other son, Hadi, who had just arrived from Paris, stood together with the family to face these difficult times. In between them, Lokman’s wife Monika received condolences from friends and family.

This was no ordinary day. But the family could not but try uphold a sense of normality: calm anger, deep sadness, working steadily, with the least sound possible.

Rasha held up the forensic report sarcastically. It was a single paper, handwritten in a hurry, explaining the doctor had pulled six bullets from the body of the “so called” Lokman Slim.

Lokman, who was unarmed, was killed in his car. His body left for all to see, as if to present a message. Rasha was not able to see her brother’s body, but someone told her his face was horribly swollen and bruised.

“He (Lokman) was not afraid of death,” she said. “We are here to stay. We are not afraid of them. They are despicable. Whoever does not find a way to discuss with others, other than torturing them before shooting them in the head, is but a criminal. Criminals are among us, but they will not control or scare us.”

“A person who is capable of committing a crime like this will someday himself be killed,” she continued. “And when that day comes, we will not cry. We will not gloat over their death like they gloated over Lokman’s yesterday. They killed him, because he was better than them. Unlike them, he always stood with the victim, not the criminal. They are criminals. They are low.”

Rasha, the writer and poet, and her brother’s main partner in publishing, does not rely on any investigations.

“I don’t really care about the truth,” she said. “I know who killed him. The technical work of the forensic doctor, security forces and investigators is the last thing I need right now. Details like how many meters he crossed before he got killed, do not interest me (…).”

Overcome by pain, Rasha was not able to complete her sentence. Her words did not come out of the blue, as she accompanied her brother on “the path of betrayal” for nine years. She was with him when the threatening slogans appeared on the walls of the house.

In December of 2019, a group of people gathered in front of the house, chanting slogans of betrayal and painting slogans on the walls reading: “Lokman Slim is a traitor and infiltrator,” “Hezbollah is the honor of the nation” and “Glory to the silencer.”

At the time, Lokman published a famous statement, in which he accused “the bats of darkness” and held Hezbollah Secretary-General Hassan Nasrallah and his ally Parliament Speaker Nabih Berri personally responsible for what had happened and “what might happen” to him, his family and home.

The security forces did not move a finger at the time. They did not take the threats seriously. The same happened when Lokman was attacked during the October 17 Revolution in a dialogue tent in downtown Beirut. The tent was burnt down amidst cries of anger and accusations of betrayal against him. It was well known that most of the attacks on the revolution were carried out by supporters of Hezbollah and the Amal Movement.

“I always used to tell him: ‘Lokman, I’m afraid. They are armed people who kill,’” Rasha said. “But he used to tell me: ‘Don’t you know Hussein’s saying: ‘Do you scare me with death?’ He was not afraid of death.”

Hours after Lokman was found dead in his car in the area of Al-Adousiya in south Lebanon on February 4, Hezbollah issued a statement condemning the assassination and asking the security services to uncover the perpetrators.

It also called for “combating crimes in more than one area in Lebanon and what accompanies those crimes relating to political and media exploitation, coming at the expense of internal security and stability.”

The party statement appeared insufficient and unconvincing, seeing the scale of the facts that preceded the assassination. Lokman was a prominent researcher and activist committed to defending human rights and raising awareness about the importance of equality and good citizenship in a country suffering from deep political and sectarian divisions.

The 58-year-old belonged to the Shiite community, yet was an outspoken critic of Lebanon’s Hezbollah, the powerful political-military force backed by Iran. Lokman’s work and activities took place at his house, where he had established UMAM D&R, in the area of Haret Hreik, a known Hezbollah stronghold in the south of Beirut.

For many years, the Hezbollah-affiliated media labeled him as “the embassy’s Shiite,” a term used to refer to Shiite activists against Hezbollah who are in touch with Western embassies. He was repeatedly attacked and labeled a “traitor and infiltrator”.

Although many of his recent TV appearances dealt with Hezbollah, which he believed was taking Lebanon hostage for Iran, Lokman did not hesitate to criticize the entire political elite, which he accused of corruption and impotence.

The reactions to his assassination spread by people close to or affiliated with Hezbollah ranged from rejoice to ignorance. Hassan Nasrallah’s son, Jawad, sparked a wave of anger with a tweet he later deleted, saying: “The loss of some is in fact profit and unexpected kindness.” Hashtag: #NoRegrets.

Nasrallah’s son’s tweet appeared to be in line with the party’s propaganda machine, which has often adopted a language of threatening to kill and glorifying death. This happened repeatedly between 2005 and 2012 when a wave of assassinations ravaged Lebanon

Can An Investigation Be Trusted?

Under normal circumstances, a transparent criminal investigation should to be the decisive measure to unveil those behind the murder. However, analyzing the crime and, possibly, holding Hezbollah responsible is not without risk, especially seeing the growing number of cases, in which people have been attacked, harassed and threatened, for publicly criticizing the party, while belonging to Hezbollah’s ‘natural’ environment.

There are many recorded stories of young men who raised their voices at the start of the October 17 Revolution and were insulted, beaten and humiliated. Also, the detention periods activists were subject to in Hezbollah-dominated Tyre were the longest compared to any other regions in the country.

Some people have asked not to rush to conclusions and wait for an investigation to take place. Yet, the irony is that Lokman’s assassination took place on the very day that the families of the victims of the Beirut Port blast gathered for its 6th month commemorating, while the investigation into the crime has been severely diluted in an ambiance of deflecting responsibility.

Lokman’s assassination took place only days after aborting the criminal investigation into the money that was smuggled out of Lebanon through the Central Bank. And it took place following many years of injustice and lack of accountability for dozens of crimes and assassinations.

In this case being patient and waiting for an investigation seems an absurd choice that only benefits the killer and not the victim. Ironically, Lokman was a frontrunner in working to abolish the climate of impunity that rules post-war Lebanon. He strongly defended the rights of the families of the people who went missing or disappeared in the Lebanese Civil War in order reveal the truth and obtain justice. Today, however, Lokman himself seems to have become a victim of that pattern of impunity.

We Will Complete Lokman’s Project

Lokman was born in Haret Hreik in 1962. His father was a well-known lawyer, who had studied philosophy at the Sorbonne in Paris. His mother was Egyptian.

The Dar al Jadeed publishing house, which he founded in the 1990s, first translated into Arabic the books of Iran’s reformist president Mohammad Khatami.

With his German wife, Monika Bergmann, Lokman produced two documentaries, one about the 1982 Sabra and Shatila massacre, and the other about the notorious Tadmor Prison in Syria, where many Lebanese prisoners were severely tortured.

The UMAM center, among other things, keeps copies of newspapers published in Lebanon many decades ago. Lokman was passionate about memory and the need not to obscure facts from the past, but to understand them.

One of the center’s most prominent activities was the project aimed at healing the wounds of the Lebanese Civil War. It has created an enormous archive on Lebanon’s social and political history, which has been placed at the disposal of researchers and media professionals.

Lokman furthermore organized activities and meetings aimed at confronting the wounds of the past and reconciliation among the Lebanese.

“They slaughtered me,” said Lokman’s 80-year-old mother Salma, who is of Egyptian origin, in a press release. “Lokman was my companion in discussion and reading. Why did they kill him? They fired five bullets at him. They wasted this wonderful energy that Lebanon possessed.”

Lokman’s wife Monika seemed more determined than ever to finish what he started.

“This project will never be silent,” she said. “They can kill Lokman, but they will not kill his ideas. And we will continue. On a personal level, if they think I will get scared and take a plane to Germany, they will be waiting till the end of their lives. Rasha and I, along with the rest of the family, will complete Lokman’s project. Lokman will live forever. They can kill his body, yet not his ideas.” 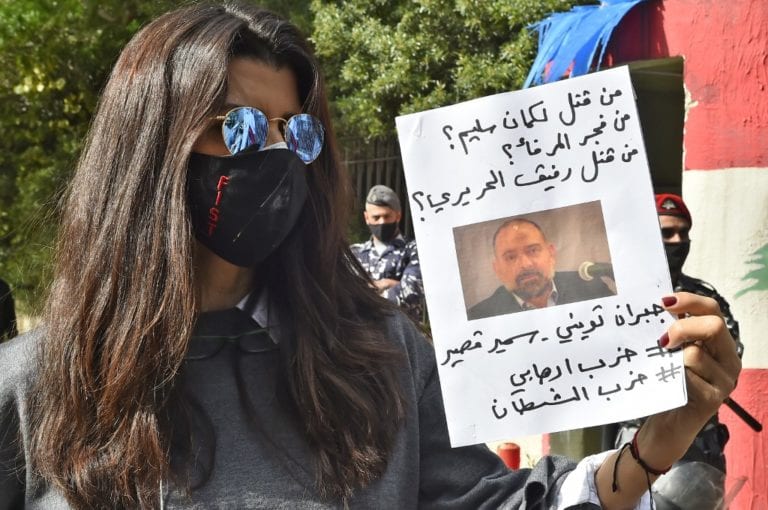