Beirut Blast: Liliane Chaito Wakes up Without Access to Her Son.

Diana Moukalled
Lebanese Writer and Journalist
January 2, 2021
Menu
The last survivor of the Beirut Port explosion awoke from her 25-day coma only to start a long battle to see her only child. What is Liliane Chaito’s story?

Liliane Chaito’s family, gathered in the family home in Beirut’s Tariq El Jdideh area, fluctuates between hope and anger. “We’re facing a situation where Liliane can’t see her son and that is not helping in her treatment,” said Nawal Chaito. “We hope that she will be able to see him soon.”

The facts conveyed by her words weigh heavily.

Her sister, Liliane, narrowly escaped death in Beirut’s port explosion. Although the doctors repeatedly told her family that the chances of her survival are low, she regained consciousness, survived and slightly responded to the medical treatment, only to find herself unable to see her baby Ali.

Nawal spoke sorrowful about the tragedy that befell her 26-year-old sister Liliane, who has been staying at the American University of Beirut Medical Center (AUMBC) for 5 months having suffered a severe injury in the port’s explosion.

Liliane, a law graduate, used to live with her husband Hassan Hodroj in Africa, where he works. She returned to Beirut last summer to give birth to her son. Her baby was only one and a half months old when the blast occurred.

A Birthday Gift for Her Husband

At the moment of the explosion of 2750 tons of ammonium nitrate in the port―which killed about 200 and injured some 6,000 people―Liliane was shopping in downtown Beirut to buy a birthday gift for her husband.

“Liliane was getting a present for her husband,” said Nawal. “His birthday was on the 10th of that month. She wanted to ship it, so it would be delivered on his birthday. She planned it as a surprise.”

This is one of the hundreds of stories left by the Beirut port explosion, but it intersects with another tragedy:  a patriarchal system that does not shy away from abandoning a victimized woman and depriving her of her son.

But the explosion surprised Liliane, as it did all Lebanese. A storefront in the Beirut Souks fell on her head, causing a serious injury. Some people thought she dropped dead on the spot and, at first, the doctors did not expect her to survive. According to her family, they even tried to prepare them for the thought that she might not make it. However, Liliane lived and responded to treatment.

“After 25 days, she opened her eyes and after a month and a half, she started to move,” said Nawal. “She recovered from her ‘vegetable’ state and started to slightly move hands and legs. After 5 months, Liliane was in a minimally conscious state (MCS).”.

The great irony is that during her hospital stay, her husband, the one she was buying a present for when she got injured, did not show up to visit her or stay by her side until 25 days after the explosion. This came as a shock to the family. They could not believe how cold he was, as the husband is supposed to be there for his wife and son’s mother.

“She was injured, yet he did not come to visit,” said Liliane’s father Nabih, a retired father of five girls. “A month passed and he didn’t show up. And when he did, he only stayed for 2 hours and left.” The husband’s visit did not last long. His family never visited Liliane either. His mother and relatives, however, proved keen to take baby Ali, and keep him with them.

They allowed Liliane’s family to see him only once.

Liliane’s family is very confused, because of the whole ordeal, especially seeing the couple’s relationship seemed normal before the explosion. Today, they find themselves in a difficult situation. They want to find a way to have enough money to send Liliane abroad for treatment. And they do not want to confront her husband and family, especially not in a legal and social environment where rights and preferences are generally given to the father and husband. However, denying their daughter access to her son in the current circumstances seems extremely unfair.

Today, the family lives in hope that Liliane will survive and complete her treatment, as so far she is unable to speak or get out of bed and can only make limited gestures and signs.

“Right now, all I’m concerned about is my daughter’s recovery,” said her father. “I want her to get back to normal and start walking again. She can see the baby later, because no matter what, he has to be with his mother.”

“We do not want to make trouble or hurt anyone,” he added. “I do not know what is wrong with them [the husband’s family].”

“There’s a problem with her treatment,” said Nawal. “She must see her son, but can’t see him. The therapist keeps emphasizing she should see him, as it will help with her treatment. And I hope we can do something. It’s been two and a half months since we last saw Ali. We know nothing about him.”

Will Liliane Be the Next Victim of Marital and Legal Abuse?

The facts tell a story similar to that of many women and girls, who found themselves severely injured, losing their vitality and energy, which pushes away their partner, driving him to abandon them, searching for another woman, in a society that practices both legal and cultural discrimination against women.

There are serious fears that Liliane, while trying to survive the worst crime Lebanon ever witnessed, may find herself facing a very different form of abuse, one that many women face when they get injured as Liliane did, leading the husband to free himself from commitment and search for another, younger wife, one not injured in an explosion caused by the corruption of a criminal authority.

Liliane’s family is facing immense hardship. When you visit their house, you feel the impact of the long and harsh days they have gone through ever since August 4.

“We are living in hell. Five months of hell,” said Liliane’s father Nabih, trying to hold back his tears. Nothing eases his pain and worries about his little girl, who was subjected to a crime caused by Lebanon’s regime of corruption.

“Those are the thugs,” he said. “The whole state knew about the ammonium nitrate thing. The whole state knew. Don’t they have kids? Don’t they have any sense of responsibility? And now they’re fighting over seats in the ministry and other positions, as if nothing ever happened.” Liliane’s family lives in hope that their daughter’s health will keep improving, amidst the sorrow of not being able to see her only child.

“My sister needs to travel overseas for treatment,” said Nawal. “Who will offer such a treatment? Who will pay for it? Look at the banking system. What’s her fault? It’s all because of their neglect.”

After Liliane’s story went viral, the Ja’fari court issued an order banning baby Ali from traveling until further notice and mandating visitation rights to his mother, so she could see him for a few hours every day, which may help ease her pain.

Lillian’s story is one of the hundreds written by the Beirut port explosion, one that intersects with another tragedy, that of the patriarchy that does not mind abandoning a victim and keeping her son away from her. In that sense, Liliane became a victim twice: a victim of the crime committed by the Lebanese regime, and a victim of the patriarchal system and its unjust laws and mindset. 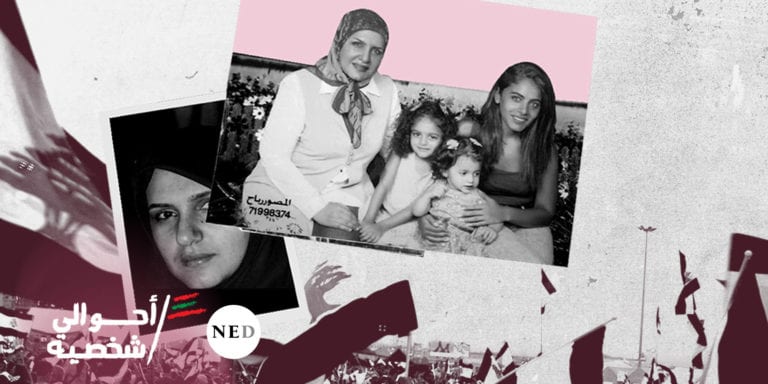