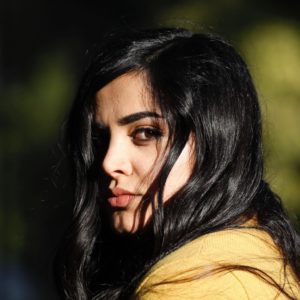 The nation provides in the ways it is structured to provide, by those who are responsible for it. Today, Syria’s so-called mutated structure is frightening and precarious; a breeding ground for immigration and abandonment. Day by day, defeat after defeat, Syrians can no longer count the pieces of their shattered lives. Precarity has become the status quo.

I watch, from the hospital window, as women and children hover around the neighborhood waste bin. An unusual view from Syrian Hospitals, but this hospital happens to be in Jaramana; one of the most chaotic areas.

In hopes of being swifter than the sanitation truck, bags are tossed to the children as they rummage through them for valuable contents, anything they could sell to survive the day. A woman spots a plastic bottle, I see her smell it for residue and then place it into a black bag to her right. Simultaneously, a child smells some food leftovers he found and places them into a clean bag.

This is the way in which many families survive; collecting food scraps to eat and selling materials they find in bins, with profits barely amounting to the price of one meal. Sometimes it seems unfathomable that many still throw food in amidst of all this poverty.

Families come and go taking garbage bin shifts with children who are barely 10 years old. The novelty lies in how widespread and competitive such survival mechanisms have become, not in their existence in the first place. Sometimes you see women catching bags before they are even tossed in the bins.

At another spot, two children quarrel. One accuses the other of following him to find the ‘better bin’ he had found before. One attempts to stop the other from grabbing a plastic container yelling “It’s mine!”. A passerby tries to calm them down, they go on as if they cannot hear him, as if he didn’t exist. The only place that matters to them is this bin, the battlefield from which they could score today’s bread.

What blessings could come from garbage?

What has remained from the waste of others, what they no longer need. One family’s trash is another family’s treasure. An additional plastic bottle or carton box completes the kilo which is sold to buy the daily bread. Surely, not all garbage is the same, families rise earlier to get to the bins in better off neighborhoods. Even within the same area, some neighborhoods are at a better economic standing than others, with garbage that is worth much more. The early bird gets the worm as waste bins have become valuable treasure mines for struggling families.

We Are Not Okay

On the hospital bed next to mine lays a woman from Al Bukamal, a city in northern Syria. As I stare out the window, I intently listen as she begins to narrate the story of how, in one day, seven of her family members were killed by ISIS. She lifts the number on her fingers and repeats “Seven! seven, in one day”. Perhaps because those of us who are farther away from this kind of death cannot fathom the meaning of losing seven family members in one day.

She goes on to tell me how one of her late family members was pregnant when murdered, and how ISIS made it a point to extract and annihilate her unborn fetus upon her death. On the other side of my view, I see a child dive into the dumpster and rip open a white plastic bag. The displaced woman from Al Bukamal continues to speak: “ISIS made sure that the fetus dies too. They want us Shiites dead, their views dictate that we must be exterminated. It was not only ISIS that held these beliefs, many Sunni men divorced their Shiite wives. Up until this point, it seemed as if they had ‘forgotten’ that they are Sunni men married to Shiite women. My husband didn’t divorce me though, we know this all non sensical. We have bigger fish to fry, we need to make sure our young survive”.

Trying to be swifter than the sanitation truck, bags are tossed to the children as they rummage through them for valuable contents, anything they could sell to survive the day.

From a dusty hospital window, the children go on rummaging through the bins, and the woman in the tiny hospital room continues to speak of her sorrow.

“We are not okay”. Syrians need to tell anyone that we are not okay, looking for any shoulder to lean on, even that of a complete stranger. The cab driver looks at me in his mirror and says: “I can’t make enough to eat”. The man who sells produce makes you feel like you are responsible for his withering crops, and that you must buy them even if they are overpriced, you need to help him cut his losses. The cab driver explains to you how his car’s faulty fuel filter is the reason behind our lagging and sudden halting amidst traffic. Repeating that he has to buy a new one as he stares at you, as if you are meant to be an agent in its replacement. In reality, Syrians don’t know who to blame anymore, and if though they know their enemy well… but then what?

“In different instances people knew who to blame for their suffocating dehumanization and poverty, but now, they are more fragile and drained than ever, standing powerless in the face of austerity, the country is lost and has become unlivable”. After a long pause the driver repeats: “this country has become unlivable for us”, as if he is echoing a phrase from a conversation he had had last year.

We both fall silent; I start to imagine other livable countries. Places wherein replacing a faulty fuel filter is not considered so straining, where we can throw withering vegetables without experiencing regret filled guilt. Painfully, I imagined what it would feel like if others heard our stories without feeling like our pain is cliché and our fears are naïve.

An old man waits in line Infront of the Syrian Trade Corporation, carrying a stained smart card in his hand as he yells: “stand in line like normal human beings!”. After a few moments he loses hope from the crowd and says: “so damn stupid, they are a hopeless case!”, and still no one turns as if they hadn’t heard the insult, almost like they are used to the feeling of humiliation. I gaze at the faces trying to find ways to describe them, and every time I fall short of finding the words. I am just filled with a sense of shame and embarrassment. This country has become unlivable for us, yes, we know. WE are certain that our homeland has become a wasteland and that dark days are coming for the poor, the hungry and the ill.

Should a whole population run from their country?

So, what is the solution? Should we all escape? What foreign country would accept millions of us? There are some who truly want to stay, they love this place. It seems harsh now, but just like us, bastards and time has left Syria oppressed and broken. We love it but it has become miserable and uninhabitable; A soul sucking creature that feeds on our unending patience. A patience that has mutated to assume the shape of an indifference that settles for less than the bare minimum. The ones who stayed on the inside relentlessly struggle with the idea that they are stuck in a place that treats them like a tenth-class citizen, at best. On the other hand, there are some longing to leave as they have been pushed into a state of constant fear; fear of going hungry and needy and losing the little we have left. We have become terrified of asking for a better life for our young. I don’t think there is a content Syrian in this whole wide world, no one has grown accustomed to this ‘new life’. Even those who have left are devoured by distance and alienation. To each story is its own misery

It is when Syrians narrate the dreadful mistreatment they have experienced at borders and airports that they feel like they are not welcome anywhere in this world. And so, we contain one another as if we are grieving the loss of the same thing, like fathers who have lost their children, we grieve the loss of our dignity. We’re stuck in a ring of fire, some say that Syrians can’t practice the same compassion when it comes to survival, they fiercely compete to sell their products and services at the best prices. The collective survival needed to live requires all of us to accept the fact that, accepting to pay for an overpriced service from the repairman today, means that tomorrow someone will pay for your overpriced withering produce, so that you can pay for the expensive cab ride next week. We accept it because were all on the losing end of the bargain together.

A double-bed hospital room has more stories than one would expect. Ill patients sitting like narrators on armchairs by windows, experiencing a microcosm of the world. Observing what seem to be recurrent scenes of misery on the streets. Stories of melancholy and despair now accompany Syrians like their shadows. Stories that get lost amidst the traffic and hustle of life as children are busy rummaging through white plastic bags in roadside waste bins.