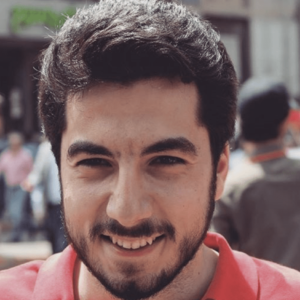 Samir Skainy
Lebanese Writer
September 7, 2020
Menu
Here are the stories of people who survived, barely living and barely able to narrate their stories; something others were not able to do.

An abnormal explosion ! I heard that a fire broke out at the port. I saw it from the balcony. It was abnormal; I have never felt anything like it before.”

This was the first conversation I had with my friend, via WhatsApp voice messages, at the moment the Beirut Port exploded on August 4th. I was in my car near Tayouneh, heading to the Ministry of Energy, where protesters had organized a demonstration in an attempt to storm the ministry. Turning to the left, I saw the orange mushroom cloud billowing and spreading, coming from the side of the port. Then my aunt called me, terrified, saying: “There is an explosion in Mar Mikhael (the church i.e. the entrance to Al- Dahieh Al- Janubiya of Beirut).” Quickly after that my mother called me from the North, shivering, asking me to leave the area because Al-Chyah was being bombed. Shortly afterwards, I read a news piece on Facebook reporting that the bombing took place in Beit al-Wasat.

I had parked my car near my university in Furn El-Chebbak, a place that was back then regarded as a safe space… it was near the Institute of Fine Arts, who would blow up an institute of fine arts? At that time, I tried to connect everything that happened in my mind, (based on the news): an explosion in the port, another explosion in Dahieh, another in Al-Chyah and another in Beit al-Wasat, where the Special Tribunal would have been held in two days. It seemed like we were undergoing a terrorist attack, similar to Bloody Wednesday in Iraq, or going back to the period of political assassinations as in 2005. I decided to stay near the university a little while longer, awaiting the next bombings to occur!

A while later, things became clear, and the orange-colored cloud disappeared into the air. We were relieved when we checked up on our loved ones, and even on those whom we did not love… Soon after, we set up everything and headed to Beit al-Wasat, beginning with the humanitarian and relief aid processes. Day by day, we gradually began to realize the magnitude of the incident, although we still haven’t grasped the horror of the blast until today.

A few days ago, during a conversation with one of my “war veteran” friends, he explained to me what had happened in detail. Despite everything he had experienced throughout the 15 years of war, it was his first time witnessing a scene like this one, and having these emotions. He elaborated: “60,000 residential units were destroyed (200,000 units according to the last statement of the President of the Republic). Do you know what this means, Samir? It means that we have 60,000 stories, all created in a split second.”

I thought of what he had said practically, and the calculation is more along the lines of 60,000 stories multiplied by four (the average number of Lebanese family members), i.e. 240,000 stories. Still, these calculations aren’t enough; I realized that those who were affected also have relatives and friends. Also, what about those that were in the blast site because of work or by coincidence, so it has nothing to do with neighboring housing units. It was at that point that I reached the conclusion that the number of stories related to the blast will never come to an end.

How Bad are Your Injuries?

This was my friend Ruby’ response, after I saw a photo of her lying on a hospital bed. Ruby had arrived to one of Mar Mikhael’s cafes and started working on her computer, then went a little further and posted some things on social media that were against the ruling class- Ruby was active since the first day of the October 17 revolution. On many occasions, her firm will was stronger than the kicks of the security body thugs.

But facing August 4, I can’t imagine how much determination, strength, courage or any other attributes were required. Upon the first explosion, Ruby thought it was an Israeli raid, she ran downstairs but suddenly found herself lying on the floor, bleeding, then in the hands of someone she doesn’t know, who carried her to Geitaoui Hospital.

“It was surreal there. I felt like I was in a corpse field. Blood was everywhere; my feet were so covered with blood, it made me think they were going to be inflamed and amputated. I did not understand what was happening. Some people were trying to help themselves, some were vomiting, I laid down under the window holding my feet waiting for any medical expert to put them back in place, while observing the sky and waiting for the other explosion that would end all our lives.”

Weeks after the accident, and in my last conversation with Ruby, she says, “Samir, I’m going to France, I was accepted in university.”

“When the Sad One Left To Find Happiness, She Found Nowhere to Go”

That expression was my friend’s comment on a photo she posted on Facebook days after the explosion, a photo of a graduation sash splashed with dark red.

My friend Tala is a young woman who planned to visit some places in Lebanon with her friends upon their graduation. They decided to first visit Mar Mikhael to take some memorial photos on the colorful stairs, wearing their graduation hats and sashes. It was the simplest form of celebration, one to be expected from young students who had just completed their university education.

They stood on the stairs, posing for the photo, and smiled….but unfortunately; the memorial photo taken that day was completely different from what they had expected. Moments later, Tala found herself lying on the stairs, with her hand bleeding heavily, while everyone had their heads between their legs. Everything shattered, and the five friends tried to hold themselves up. They moved from one street to another, seeking shelter from what they thought was a raid.

A few minutes later, Tala could not feel her fingers; her friend wrapped her hand with a piece of cloth and looked for someone to take them to the nearest hospital. Through all this, Tala- in her graduation robe, cried and laughed alternatively.

Commenting on the accident today, she says: “I was literally born again- coincidently and ironically celebrating my birthday on the 5Th of August.”

Her group were physically hurt, but the damage was far beyond that. “Our mental states will be affected for a long time, maybe for the rest of our lives. Post traumatic stress disorder is a common symptom between us now.”

Another friend tells me that she cannot remember the moment of the explosion. All she remembers was that she was in the Ministry of Energy protest when she heard the bang, which was so very close to them. The next thing she remembers was getting home, and the next day, participating in the relief works. Many do not remember that moment, and also the opposite, many have had painful visual images imprinted in their minds, which magnified the shock.

Days ago, I visited a friend to check on him. When I entered his home, he pointed to the table. “You see those packs?” (7 or 8 empty cigarette packs were placed on the table). “This is everything I smoked since the last time I slept.” I did not understand if he meant that he had slept but also smoked this number of cigarettes since yesterday? Or was it that he smoked as usual but has not slept in days? It turned out that both prospects were wrong. He neither slept nor smoked normally.

They left the hellish Lebanon, leaving us behind like moving corpses, awaiting the second explosion.

All these are people’s perspectives, ones who still have a life margin through which they could even tell those stories, but others do not have such a margin. I cannot dare to ask a casualty’s family for a story, even if it were for the sake of documentation, I simply could not. No one can tell a story on the casualty’s behalf, they are gone now with their stories and secrets. They are gone without telling us how they thought and felt at that painful moment. They left the hellish Lebanon, leaving us behind like moving corpses, awaiting the second explosion.