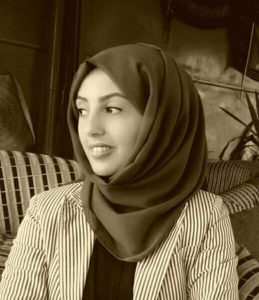 Abeer Mohsen
Yemeni Journalist
September 2, 2020
Menu
The law in Yemen is selective and discriminatory against women, focusing it’s restrictions on the shops and centers where they worked, while other shops belonging to men were left open without any threats.

“My father didn’t have a steady job, so I had to rely on myself. I decided to buy some products, and I sell them on social media. But the Coronavirus pandemic stopped my work because I was not able to deliver my goods to the customers. This cost me a lot; I lost my business now and I have to take loans to continue living.”

Samar Al-Katheeri was simply trying to devise ways to help her work despite all the difficulties she had faced. She tried to start a simple project to provide for her family’s needs, but when she began to make a good income, the pandemic came, followed by the closing down of businesses, and she had to suspend her work.

Al-Katheeri, from Hadramaut, had graduated from the Faculty of Education, but the harshness of life and the high costs of living led her to work in a different field, to provide a living for her family. This also came after her divorce and getting the custody of her two children who depend entirely on her, as she had refused to claim child support from their father, because the process to achieve this would have cost a lot of money, and taken too long.

“I thought about it a lot, and tried to do anything to provide my children with a decent living. Life in this country has become a struggle, especially if one wants to live without begging for money,” she added.

The devastating effects of the “Covid-19” pandemic have extended to Yemen, and the capital, Sanaa, was partially shut down. On May 17, 2020, a statement was issued in which the Emergency Operations Room of the Technical Committee for Combating Epidemics in the capital, ordered the shutdown of shops, centers and markets selling clothing around the capital temporarily for 12 hours, from 6 p.m. to 6:00 a.m.

Still, it seems the enforcement of the law was selective and discriminatory against women, because it’s implementation ended up focusing on the shops and centers in which they worked, while men’s shops were left without any threats, even though they had obviously not complied with the precautionary measures adopted by the World Health Organization to reduce the spread of the epidemic.

“Women face great challenges in war. They become either breadwinners or co-breadwinners, in a society where most of them had previously felt that educating girls was unimportant, and that their employment was a luxury,” said Abha Aqeel, a Yemeni journalist. “With the collapse of the economy, the fields where women can earn a living have become very limited, whether in terms of employment opportunities or small-scale projects that rely mainly on the market’s movement.”

“Many women have been waiting for bazaar seasons, whether at celebrations or festivals, especially female instructors and university students,” Abha added. “They register their names in return for a small fee. These are the places where they can sell what they produce. Now the economic situation is getting worse, especially with Covid-19.”

Everything stopped and life is getting harder every day, and if the pandemic ends, these women need a lot of time, effort and money to even return to square one.

Cultural and religious heritage continues to be strongly prevalent in Yemen. Women are looked down upon in Yemen, and this continues to haunt them and hinder their progress, and may have been exacerbated recently by the war and the incursion of religious groups who use their power to limit the role of women in public life and stereotype it, affecting their impact on society.

Yemeni women have never been independent in managing their life affairs, including paid work outside or even inside their homes… But the war has turned the tables around, and the presence of women in the labour market has become an urgent need, even if they were not prepared for it.

After 6 years of war, something positive seems to have appeared in the lives of many women. The country has experienced a collapse in the economy and a large proportion of men have become absent from their homes, or lost their jobs. The war has killed and injured more than 17,500 civilians, according to Human Right Watch’s “Yemen Data Project”, published in its 2019 report.

All of this worked in the favor of rearranging the roles between the breadwinner and the dependent in the Yemeni family. Women have become more present in the labour market, despite the gender gap between males and females, which is said to be around 91 percent, according to the latest census published in 2018. However, for example, in areas controlled by Ansar Allah (Houthis) where women constitute the majority of the population, we noticed that there are female workers in places that until recently were restricted to men, like waitresses in restaurants, shop workers others, that used to be considered shameful and degrading for men to allow ‘their women’ to do.

“Women face great challenges in war. They become either breadwinners or co-breadwinners, in a society where most of them had previously felt that educating girls was unimportant, and that their employment was a luxury.”

This opportunity finally came to Yemeni women, only as a necessity, an exceptional situation for them. They were not ready enough, as women usually do not get the same level of technical and vocational training as the males do. Women form up to only 25 percent of the participation in local training, and a much lower percentage in international training, which may not exceed 15 percent.

Many have therefore resorted to starting small, self-financed projects, without prior experience, or working in public social services, although all those employed in them, whether women or men, are looked down upon.

Women face psychological warfare from religious groups that have gained more power during the war and in the midst of this absurdity. Women also suffer from insecurity, as Somaya Mohammed complains, “Especially with the arbitrary measures imposed by the Houthis in the centers and malls. They create problems in order to cut off our livelihood for no reason.”

Somaya is one of the few lucky women who had financial and moral support from her husband or a male relative. She now works in a small shop in one of Sanaa’s malls, but even when family is supportive, society and authorities become obstacles, and women always struggle to obtain their basic rights guaranteed by the Yemeni law, such as freedom to work.

Many of the texts of the Yemeni law, according to specialists, are contradictory, with the aim of stereotyping women and limiting their participation in public life, so that they remain subordinate to men. With regard to women’s work, according to the constitution, they should be free to work or not, as well as to choose the type of job they want. However, Article 40 of the Personal Status Act, which requires the husband’s consent to leave home to work, restricts this freedom and violates a woman’s constitutional rights to work, education, personal freedom and social and political participation. In addition, the patriarchal society stereotypes women and restricts them to certain areas, such as education and nursing.

Huda Al-Sarari, president of “Difaa for Rights and Freedoms” foundation, said that although Yemen has signed the CEDAW Agreement, which binds it to its legislation as well as the Vienna Convention, discriminatory provisions still exist in Yemen, which deprive women of standing on solid ground while demanding their rights.

“Yemeni women bear a lot of burdens during the war,” she said, “and those who had to go out to the labour market end up also confronting their parents, because it is unusual in society, and then that could generate domestic violence. Of course, they do not have legal protection mechanisms or psychological support, in addition to the lack in political will to change these discriminatory texts, which was exacerbated by the continuation of the years of war.”

It is worth mentioning that there are many studies and reports that discuss the laws that are unfair to women and end up being contradictory, allowing males to manipulate and circumvent. This is in addition to proposed draft bills that guarantee women a limit of freedom, dignity and safety, but they were aborted under the pretext of war.