From Beirut to Damascus: “Nowhere Is Safe”

I’ve been struggling to collect the words, over the past few months, to describe the rapid deterioration I was witnessing in this country. Every night I’d write a sentence or two, allegories about pain and corroding livelihoods. Then, like a macabre sitcom, a nightmare ensued, as if to answer our feeble attempts at humor when we’d ask: “could this get any worse?”

Agonizing proverbs manifested themselves into reality. The government’s negligence and rampant corruption, has quite literally, just exploded in our faces; specifically, 2700 tons of neglected ammonium nitrate, caught fire, causing the port of Beirut to explode, a 3.3 on the Richter scale, destroying thousands of buildings in its surroundings, turning them into rubble in seconds.

To those who don’t know Beirut, I live in what used to be one of the most vibrant, youthful, and historical regions in the city. Gemmayze and Mar Mikhael, a long stretch of the two streets connecting, is where young adults, students, artists and many curious foreigners flock to every year, in the center of the city, closest to one of the most booming regions in the capital. This is of course, in addition to the thousands of families that have inhabited these areas, their homes centuries old. I used to envy those who lived there, with the colorful vintage tile patterns and the high ceilings; this was authentic Beirut, and I moved there as soon as I got the chance. At night, the bars on the streets welcomed those from all around the country, to escape their lives and enjoy their time with their friends; even if it were not the main event, it was customary for people my age to at least make one stop in these areas, for a few drinks and laughs before their weekend night ensues.

I thought about those things, when I saw the lady that owned the little supermarket next to my favorite bar stand on top of what was now debris of Lebanese chips and beer, her legs bleeding, her eyes fixated in complete shock. I thought about it when my closest friend described seeing the chef from one of my favorite sandwich shops be carried on a makeshift stretcher, fashioned out of the shop’s sign that had come unhinged, his head opened, bleeding through his chef’s hat. I thought about it when I ran, as lifeless bodies and bloody humans suddenly and aggressively became a new and gruesome addition to my visual archive.

When the explosion hit, the rumors started. If Israel had bombed us, it was not over. I ran through the rubble clutching my dog as if she were a newborn, since walking her was impossible in the pool of glass and blood that had become the new street. The vehicle that had decided to be my savior was shattered but still started, and I sat on the crushed crystals my heart pounding, thinking: I am going to die here.

It wasn’t hard to imagine my death. There was death everywhere.

I’ve read and reported on war stories for a long time. I’ve shaken my head in pain at how trivial people’s lives were, dying under airstrikes back in my country, the world renowned international battlefield republic of Syria. But no one will truly understand, their own insignificance, until they see the rawest version of it, represented by the cruelest and quickest loss of life humanly possible around them. Friends reach out, tell me how important I am to them, and how I should remind myself of my value, as a force 2,700 tons larger than them had made a devastatingly convincing argument for the contrary.

Hours of becoming acquainted with PTSD syndromes and survivor’s guilt later, I picked up the shards of glass from my bedcovers. I heard the stories. I saw the names. I saw the videos. I found out who’s been injured and who’s now missing. I watched as people my age and younger, swept, fed, and carried, biting their tongues and working through their distraught mental states, dodging soldiers who’s only job it seemed was to yell orders at cars coming through the ruins. I didn’t see a police officer lift a finger.

I heard they knew. I heard that they knew the weapon of mass destruction, was there. I heard that instead of warning the masses to get out from the port on the radio when the fire started, they were broadcasting statements from politicians, assuring the public that they were okay. I heard that none of those murderers were harmed, and were now squabbling over whose fault this was. I heard people were petitioning for occupation, because a new colonial chapter with France would have more mercy than those who have held us hostage for decades.

I heard many want to take those responsible to court.

What about us? We didn’t have the choice. We couldn’t negotiate our fate. We couldn’t defend ourselves, to try to convince them why we, our homes and our loved ones should be spared.

Four days later, I finally ask my mother how she’s doing. I knew, from Damascus, that she was holding herself together when she spoke to me. Today she finally tells me how scared she is. I hadn’t been keeping up with the news, in Syria or anywhere else but here. She tells me Corona has killed three of her friends, all in the five days that have passed since the explosion. She tells me fifty doctors have died, out of how many that we’d had left? I’ve lost count.

I’d been wondering myself for a few days now whether I had corona, so where many of my friends. We’ve been in crowds, whether they were bloody ones, ones holding brooms, or ones protesting through their pain. Those of us injured were in hospitals where wards in which patients and doctors were quarantined were blown apart. I remember two weeks before, how I didn’t feel safe being in my home even after wiping anything that came in with alcohol. I remember cleaning a neighbor’s apartment, when one of the volunteers, ‘lucky’ with a few stitches, asked me if I’d seen a blue mask around somewhere in the rubble, and then went on to nervously wonder to me, “do you think I should care?” It was a danger we all knew we had no choice but to risk, and almost seemed a less horrifying fate than ours had been.

My mother frantically told me she can get me a car back to Damascus. I thought about how ironic it was that I’d feel safer there.

We’re dropping like flies. The doom is so damning, and friends nervously discuss how they feel like we are heading towards the end. I’ve almost made peace with the idea that everyone I know is going to die soon, I started to calculate: would I rather die with my parents in Syria? Or would I rather die with my partner and friends here? What if my parents die? Would I rather be there or hear about it from here? I should call my grandfather as soon as possible, I should hear his voice.

I have to stifle a scream every loud sound near me. I hear sirens and screams in the water running in the shower. At night, with my weak eyesight, I see bleeding bodies in blurry far away objects.

The furniture in the rooms, at the mountain escape a friend graciously offered, provides more room for mental tricks. Like an art director, my eyes sculpt the room into rubble, to show me how it could be done, in seconds. The windows, debris and blood could embellish the fluffy couches. I could see the innermost layers of infrastructure within the doors, chairs and tables left bare, for all eyes to wander in horror. Home items crushed and eerily dislocated, out of their century old habitats.

My mind has been molded and provided a new lens: to strip humanity naked, left lingering unhinged, utterly powerless.

I was declared a waste person, I got lucky to get away with my life, but now nowhere seems safe.

My phone explodes with messages, telling me to let them know if I need anything. Wipe my memory of the past year, if you can.

Vicken Cheterian
Snap Parliamentary Elections will be held in Armenia on June 20. Will anything survive from the promises of the 2018 peaceful revolution? 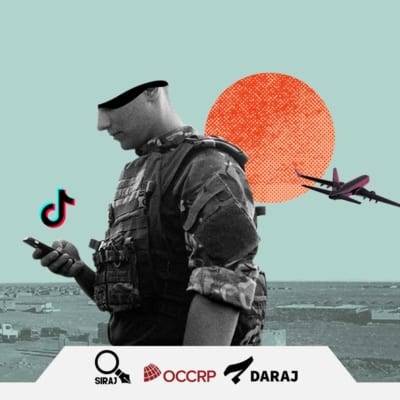 OCCRP
This service is likely seen as providing a “safe haven” for those who do not want to join the military and cannot afford to pay the exemption fee, which recently shot up to approximately $8,000.