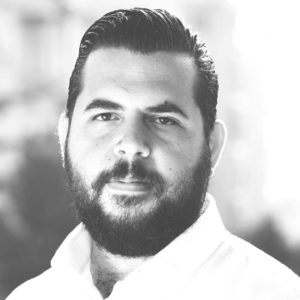 Jad Shahrour
Lebanese Journalist
August 5, 2020
Menu
Smoke rising, bloody scenes, and broken-down cars in the middle of the road, as if we were in a Hollywood film. Women and children with torn clothes, their faces covered with blood, shocked, wounded and civilians’ faces injured with glass chips. It’s another Chernobyl.

Inside the nearest shopping complex to the blast scene, as I was shopping for the small home I was preparing to live in with my beloved future wife, I jumped out of my own skin with all those who were there and we were all screaming, frightened and panicked.Despite the suddenness of the event, I saw everything, as if the disaster happened in slow motion. I tried my best not to cry until I became alone.On a less than an ordinary day, I was concerned about financial, moral and professional stability on the one hand, and about my family and my life partner on the other. The Beirut blast stopped me, depriving me from astonishment, feeling, desire, taste and breath and leaving me with nothing but the tremble of fear.

This is not a political article, and you will not read an accusation to any of the parties, or a comment on the media content related to the explosion. I am describing here the moment of explosion, and my only comment is, “I wish I wasn’t there!”.

Our assassination was willful, premeditated, and executed by those who are more cruel than our Israeli enemies. They are the rulers of this country.

I pressed my fingers against my fiance’s hand and we ran together, while the roof of the mall collapsed on us, until we reached the underground parking lot. When we got there, a woman held on to me and asked me to accompany her to her car. She was crying as she feared for her twins. Another pregnant woman whose face turned pale was running in front of me, but I could not call her to try to help her.

Smoke rising, bloody scenes, and broken-down cars in the middle of the road, as if we were in a Hollywood film. Women and children with torn clothes, their faces covered with blood, shocked, wounded and civilians’ faces injured with glass chips. It’s another Chernobyl. People chatting in horror, someone sitting still by the edge of the road without saying a word, the panic of the security men, the fire fighters, the Red Cross and the sound of ambulances’ sirens, the sound of cars treading over the glass fallen from the shops and buildings fronts. Without exaggeration, and the images will prove my words, along the sea line of the Beirut waterfront, not a building remained sound.

On the radio, you can hear provocative statements, reassuring us that a certain politician is OK, and that there is no political targeting. In Beirut, the most despicable thing that you can hear facing the blood and dust that is before me is a politician saying, “I am OK,” while a father on the street is running carrying his dead son, a politician commenting on what happened while a mother is unable to stand up, a trivial political statement while workers are lying dead on the ground.

The night that stole our sleep and the tears that flow on our cheeks non-stop, the night talk with family, friends and colleagues cannot be summarized in a lump or a scar, but need more than psychiatric help. We are the people of this catastrophe, and we will not forget, nor will we forgive, and we will need more than human memory to preserve our tragedies but at least the streets of the city will preserve it.Dead bodies covered what used to be called “Beirut harbor”. Bodies were reduced to dust, other bodies sank deep in the sea, and some were thrust to neighboring areas. It is strange how we have become; we hear about death silently and in apathy… no that’s not apathy, but we are no longer able to describe our feelings. We no longer feel anything and our heartbeats are numbed, maybe we have turned into inanimate objects out of hopelessness.

We drove my fiancé’s car to the public street, and there we saw the scenes that no words will be enough to describe. We were inside the car on our way to Beirut, I saw what I never wished to see. The extent of destruction I saw with my own eyes can be summarized in this sentence: “If Israel had bombed Beirut, the result would have been less damage.”

Our assassination was willful, premeditated, and executed by those who are more cruel than our Israeli enemies. They are the rulers of this country. Political heroism started; the Prime Minister lifted the Lebanese flag off the ground! To be honest, cursing this Republic with its presidents, representatives and ministers is far less than enough. Media hosts the perpetrators of the crime and opens the air for them to comment on people’s bodies at the crime scene. A child screaming in a social-media video, “Father, I don’t want to die.” The father holds his child and says, “You will not die.” We feel the force that has put the child and his father under the glass at home, terrified and trying to inquire after other family members.

As I write this article, I still hear the sounds of removing the rubble. Security elements are on the road, nothing else. People have made pages out of their skin to document the history of this country. They sacrificed their own flesh and blood to secure the future for their children, while the ruling authority was plotting to kill us. We are dead in our living bodies, we are nothing more than that.