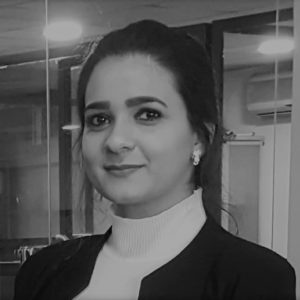 A comment posted by Atikah (29 years old), on one of her friend’s posts on “Facebook”, has caused her to be relocated from the Euphrates Hospital to Tarmiya General Hospital in Baghdad, as a disciplinary measure.

“One of my friends wrote a post on Facebook stating that there were Coronavirus cases in Euphrates Hospital in Baghdad,” Atikah told Daraj. “And I commented in support of the information, saying that those cases are still in quarantine.”

This incident occurred more than 3 weeks before the escalation of the outbreak of the Coronavirus (COVID-19) in Iraq. “When the clock struck midnight, the hospital director called me, informing me that the director of the Baghdad Health Directorate in the neighborhood of Al Karkh wanted to speak to me the next day because of my Facebook comment,” said Atikah.

Atikah works at the Euphrates Hospital, continuing to pursue her studies to become a medical technician in the field of anesthesia. She recalls transferring from the Euphrates Hospital because of her comment, adding “Dr. Jasib Latif Al-Hajami, Director of Baghdad Health / Al-Karkh, blamed me because I posted a comment spreading false information, when I confirmed the presence of cases in the hospital.” She added: “Al-Hajami also accused me of joining demonstrators, describing them as (Ba’athists) in the demonstration squares, when I was actually among protesters in the first aid and medical services tents.”

Euphrates Hospital is the main health care institution that has kept the patients in quarantine in Baghdad. “The hospital can only accomodate 100 patients, and every suspected patient is kept in a room by themselves or with their families, until the lab results―sent to the Central Public Health Laboratory―are out, which usually take around 48 hours,” said Atikah.

Atikah explains that Quarantine departments at the hospitals are lacking masks and protective suits. “The protective suits we’d been using, since the outbreak of Coronavirus, were manufactured in 2003 and have expired since 2018; so the medical staff had to purchase new valid suits at their own expense,” she added.

The staff of Euphrates Hospital do not wear masks, according to Atikah’s insights. “After a while of the outbreak of the virus, the personnel responsible for the quarantine corridors became the only ones to wear masks, while others have stopped doing so,” she complained.

There are no oxygen therapy rooms in the hospital, knowing that they are necessary for the treatment of Coronavirus, as it is a respiratory system disease. The patient is discharged from quarantine after 14 days, after performing two check ups which prove that he has fully recovered. “Others require a longer quarantine period, but the hospital doesn’t keep them, they discharge them because the hospital cannot accommodate more than a hundred patients.”

Atikah noted that “with one of the patients, after 14 days of quarantine in his room, we conducted a checkup of him, and the results were positive, which meant that he was still infected with the disease and had not recovered yet, but the hospital allowed him to leave and he subsequently hosted a meal.”

Atikah was not the only voice that governmental agencies tried to silence when they spoke about the spread of the disease, A.Z. tells Daraj. “I called my friend, who is the office manager of Dr. Abd al-Rahman al-Muhammadawi, the director of the al-Kadhimiya Teaching Hospital, and he told me that the latter was infected with the virus, and that Dr. Jasb al-Hijami, the director of Baghdad’s Health Ministry in al-Karkh, refused to announce the news for fear that the medical staff would escape from the hospital.”

Hours later, pictures of the medical analysis of Muhammadawi spread, and it was exposed that he was infected with the virus, along with his office manager, but Dr. Jasb Al-Hijami, declared that “the director of Al-Kadhimiya Hospital for Education is in good health and there is no truth in these sayings.”

The medical staff in Iraq’s resorting to secrecy has enraged its citizens, and broken their trust in the Iraqi medical and health authorities, and this comes despite a source affiliated with the Central Health Laboratory (which is the only laboratory in Iraq mandated and accredited by the International Health Organization to analyze cases of Corona) confirming the high numbers of those infected.

The source, who chose to keep their identity concealed, confirms “50 percent of the shortcomings that caused the spread of the virus has been caused by health institutions in Iraq, especially the Ministry of Health, while the other 50 percent is caused by citizens because they did not cooperate with medical and health personnel and ignored the seriousness of the epidemic.”

He added, “We’re following very primitive method of conducting tests of the disease, as was noticed by observers who came to check up on our procedures and methods of analysis in the laboratory,” pointing out that “it is not our fault, the problem is the deteriorating health situation in Iraq, despite our keenness to double our work in the laboratory, as the state of emergency was declared and work within the laboratory has bec0me available for 24 hours during the day, but that is not enough to stop the spread of the virus.”

Lack of awareness among wide segments of the population in one of the most important reasons that led to the spread of the virus. Malik Al-Zubaidi, associate director of Al-Hussainiyah Health Center in Baghdad, relays that “a woman came to the center, with symptoms of the Corona disease, from shortness of breath, high fever, and a headache …” continuing, “According to hospital procedure, patients must be dealt with as if they were infected until proven otherwise. We tried to send her to a hospital near the center to perform the necessary tests, but she called her husband, who spoke to me cursing and threatening to prevent us from quarantining his wife until the results of the tests come out. This prompted us to take some information about her and allow her to go home; we have no ways of dealing with these kinds of patients who might cause harm towards us or towards the center and the hospital.”

In conjunction with the occasion of the anniversary of the death of Musa Al-Kadhim, one of the Shiite imams, whose shrine is located in the Al-Kadhimiya district in Baghdad, where usually all Shiites from the Iraqi governorates as well as from neighboring countries gather to pay a ceremonial visit to the shrine, the Iraqi Ministry of Health warned against gatherings, a spokesman Saif Al Badr stressing “despite the importance of these religious rituals, they may be one of the main causes of the spread and outbreak of the virus. Therefore we warn citizens against practicing them and gathering, and we ask them to adhere to their homes.”

As a result of the citizens’ failure to comply with the ministry’s warnings, and despite the imposition of a week-long curfew in Iraq from 16 March 2020 to 24 where visitors to Musa al-Kazim shrine in the Al-Kadhimiya area continued to perform their rituals, some clashed with security forces in separate areas including the Jundoul intersection in Adhamiya and Adan Square in Al-Kadhimiya as an attempt to reach the religious shrine.

Yarub al-Dulaimi tells “Daraj”, “ Three days ago, while I was listening to the sound of a recording of the Quran with rising volume from my neighbors’ radio, I had my doubts and this prompted me to visit him. I was surprised when he came out wearing a mask and gloves, and he told me that he had the disease and was waiting for God to rescue him.”

Yarub’s fear of the disease cause him to run away from his neighbor, he explains, “I ran immediately to my house, I do not think that I can communicate with someone carrying a fatal and contagious virus, and I am not the only one who did this, even the owner of the grocery store, he avoids dealing with this neighbor.”

Many families have been infected with the Coronavirus in Iraq, alongside a lack of awareness about how to deal with these cases, even among medical staff, which has made those infected feel ostracized, linking being infected with the Coronavirus with a stigma that has made everyone around them avoid them. Ahmad Abdul-Qadir, who works in one of the hospitals in Baghdad, explains “We are placing the food tray on top of the garbage bins, for fear of coming near the infected person in quarantine, then we inform the patients of the location of the food from a distance; it is not easy for us”.

This has led most of the infected patients to flee, some preferring to be quarantined in a room home, but this did not prevent the cases from rising rapidly in Iraq. Doctor Ahmad al-Qaisy confirms that, “we fear the possibility of an alarmingly high infection rate after the occasion of the anniversary of the martyrdom of Musa Al-Kazim, and the lack of commitment of citizens to the curfew, and their insistence on gatherings, which will lead to a high death toll.”

In Iraq, some people resort to traditional folkways to protect themselves against the virus. For example, old ladies use garlic and onions, believing that they can protect against infection, while others use incense as a preventive measure. Others resort to visiting shrines and praying to God to help them get rid of the Coronavirus, which they consider an affliction from God due to the spread of corruption on earth.

The government of the Kurdistan region in Iraq, after the spread of the disease in a large proportion in Sulaimaniyah and Duhok, worked to impose a 14-day curfew. After the decline of the number of infections, the government extended the curfew for another week, while the Duhok Governorate imposed an extra 2-week curfew, in line with the measures taken in Sulaimaniya and Arbeel.

The central government also imposed a curfew for a whole week, on top of a fine of 100,000 Iraqi dinars on anyone who violates this decision. In case of repetition of the violation, the fine would reach 300 thousand Iraqi dinars alongside the seizure of his car for a period of 5 days. In spite of that a considerable number of citizens did not abide by these measures, for reasons including trying to earn a living.

Bashar, a taxi driver, tells Daraj, “We depend on our daily work, and if the curfew is imposed, we will be unable to provide for our families. The Iraqi government did not initiate the disbursement of any amount to the Iraqi citizen in this crisis, like the governments of other countries.”

The curfew and the citizens remaining in their homes has caused most owners of grocery stores to double the price of the materials they sell, which has prompted the Iraqi National Security Agency to publish a special phone number for any Iraqi citizen who is exposed to an exploitation attempt of the sort by merchants or even pharmacists who exaggerated the prices of makes, gloves and disinfectants.